You are here: Home / Europe / ISIS has launched a new recruitment drive among unaccompanied youngsters in Germany’s refugee camps 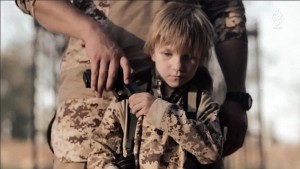 Unaccompanied children in German refugee camps are being targeted by ISIS to carry out Paris-style massacres in a new recruitment drive.

It comes as the Federal Criminal Police (BKA) announced the number of potential terrorist offenders under supervision of German security authorities had once again increased.

Now underaged and unaccompanied minors are the targets of radical Salafists eager for recruits to cause Paris-style carnage in towns and cities in Germany.

The interior ministry expressed concern on today saying that youngsters in particular ‘are being recruited with money and false promises.’

Salafism is an extreme form of Jihadism that believes in violence to combat anyone who is not a Sunni Muslim.

Recruiters in Germany have sent over 700 young people to battlefronts in Syria and Iraq in the past few years.

Now, say the government, they are turning their sights on to the impressionable youngsters caught up in the refugee tide.

The government says that recruiting pressure will increase.

It said that since October last year it has recorded 340 cases where migrants have been contacted to join the cause.

But the true figure is likely far higher.

Many immigrants are too afraid to report contacts with radicals for fearing of losing their chances to stay in Germany.

‘The contacts are sometimes made under the guise of humanitarian assistance,’ said the government, with recruiters offering money, food and prayer mats to refugees who have nothing.

‘Unaccompanied minor refugees, are particularly susceptible to the promises of Islamists,’ warned the interior ministry.

‘It ithe task of the whole of society to protect refugees in Germany from any hate propaganda and to enable refugees to enjoy rapid integration in Germany and thus avoid ceding any further ground to the Salafis.’

But Ulla Jelpke, domestic affairs spokesman for the Die Linke party, said; ‘I find it a matter of concern that the federal government has not discovered new ideas to combat Salafist propaganda.’