You are here: Home / Mediterranean / ISIS gains a foothold in Gaza 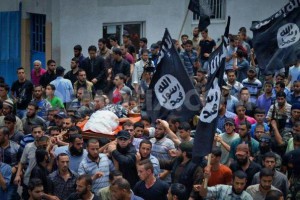 The early hours of the morning of Nov. 24 began with a boom. The Israeli Air Force was hitting targets here in the Gaza Strip, shattering the pre-dawn quiet of this besieged coastal enclave.

Someone had shot a rocket over the Israeli separation barrier. Was it Hamas? Or Islamic Jihad? Was this the beginning of a new war?

Nope. Although no one claimed responsibility, the culprits almost certainly were from a small group calling itself the Sheikh Omar Hadid Brigade (SOHB), the affiliate in Gaza of the so-called Islamic State, or ISIS.

Though some, including Israeli Prime Minister Benjamin Netanyahu, may want you to believe Hamas and ISIS are buddies and would work together, this isn’t the case.

“We condemn any actions, especially the murder of innocent women and children, that al-Qaeda or [ISIS] use,” says Ahmed Yousef, a senior Hamas figure who, in 1968, became the pupil of Hamas’s founder, Sheikh Ahmed Yassin. He told The Daily Beast that in his view, the destruction of historical monuments in Iraq and Syria, as well as November’s attack on Paris that killed 130, are “barbaric.”

Before the question could even be asked, Yousef explained that “the last suicide bombing used by Hamas was in 2004,” saying that the technique of indiscriminate killing was harming the movement.

Yousef said that the Salafist movement, a super-fundamentalist branch of Sunni Islam that strives to emulate the Prophet Muhammed and his early followers and serves as the foundation for radical groups such as al-Qaeda and ISIS, has a long history in Gaza.

“For years, they were ‘quiet,’ they didn’t get involved in politics,” Yousef said. Then, “When Hamas won the Palestinian elections in 2006, some of them decided to involve themselves.”

The Salafis began by setting up the Ibn Taymiyyah mosque, named for an Islamic scholar active in the 13th and 14th centuries whose strict interpretation of Islamic doctrine is often cited as a main inspiration for armed Salafist groups, in the conservative city of Rafah in southern Gaza next to the Egyptian Sinai. They hoped to have a space where “they controlled what was preached, without oversight,” according to Yousef.

The man who preached at the Ibn Taymiyyah mosque was Dr. Abdel-Latif Moussa, a Salafist who, Yousef says, had links to al-Qaeda. On August 14, 2009, Moussa declared an Islamic emirate from Rafah, directly challenging Hamas rule.

The next day, Hamas security forces stormed the mosque, and Moussa died in subsequent clashes.

Since then, relations between Hamas and the Salafists in Gaza have been rough.

The armed followers of Moussa, Jund Ansar Allah (Soldiers of the Followers of God), and other Salafi offshoots sporadically attacked Hamas positions. They also murdered Italian activist Vittorio Arrigoni in 2011, after attempting to force Hamas to release one of their leaders. Arrigoni’s killing was widely condemned. He was a beloved figure in Gaza.

SOHB, Gaza’s latest incarnation of Salafi radicalism, burst onto the scene on June 3 this year, when it fired its first rockets at Israel.

The rockets were easily dealt with by Israel’s advanced “Iron Dome” missile defense system, and the IAF quickly retaliated by bombing three sites—two belonging to Hamas and another to Islamic Jihad. Israel promises to hold Hamas responsible for any rockets. So, when SOHB bombs, Hamas pays the price.

The de-facto government of Gaza is attempting to keep calm and avoid confrontation, as the severe devastation wrought by the 2014 war with Israel still weighs heavily on the 1.8 million Gazans, more than 2,000 of whom were killed in the 51 days of carnage.

Waleed al-Modallal, associate professor of political science at Gaza’s Islamic University and expert on the religious nature of the Israeli-Palestinian conflict, told The Daily Beast that he can’t guarantee SOHB is “specifically linked to ISIS.” But perhaps the Salafis themselves can do so.

The letter SOHB used to claim responsibility for the June rocket launch was decked out in ISIS insignia, including the group’s menacing black flag.  Modallal says that their “methodology is very close to how the Islamic State acts in Iraq, Syria or even the Sinai.”

Interesting point. Ansar Beit al-Maqdis, the ISIS affiliate in Egypt’s Sinai Peninsula, has been terrorizing the area for the past several years.

In July 2015, it launched an attack in the northern Sinai that killed 64 Egyptian soldiers, making it the deadliest day for Egypt’s army since its last war with Israel in 1973.

The Daily Beast spoke to an Egypt-based researcher for Human Rights Watch, who spoke on the condition of anonymity, about Ansar Beit al-Maqdis. He said that the group has “advanced weaponry,” such as Grad rockets and modern assault rifles, much of which found its way into Egypt through the porous border with war-torn Libya.

“Ironically, the weapons ABM possesses were provided by Western governments, during their support for armed militias attempting to oust [former Libyan dictator Muammar] Gaddafi” during the armed uprising in Libya that rose out of the Arab Spring.

Although Egypt has recently enforced a strict crackdown on the smuggling tunnels between Sinai and Gaza, it’s possible some advanced weapons made it across before the subterranean passageways were drowned in sewage and seawater.

On Oct. 10, SOHB reportedly fired a Grad rocket at Israel, which is much more advanced than the previous homemade rockets they had used.

In return, Israel bombed a Hamas training camp, and killed a five-month pregnant woman and her three-year-old daughter in the process.

Hamas pay a price, but as usual, the people of Gaza pay even more. But the threat that ISIS will grow in Gaza is real.

Professor Modallal says that people in the strip are frustrated with their situation—the world’s highest unemployment, with more than 60 percent of youth without work, near-endless bombings, and no hope of escaping the blockaded enclave due to both Israel and Egypt initiating border closures and building separation barriers.

After watching years of Palestinian attempts at the establishment of an independent state founder, says Modallal, they “look to the model of ISIS, who has carved a state out of Iraq and Syria in spite of a global coalition against them, and see it as a way of achieving autonomy and ending the situation they’re in.”

“The things ISIS does are against our culture as Palestinians,” Modallal says. “However, frustration can lead people to make a decision too quickly.”

In point of fact, the aforementioned border closure, separation barrier and Iron Dome missile defense mean that this threat doesn’t have much chance of seriously affecting Israel. The population of Gaza is isolated and under near-total control as far as the Israelis are concerned. The threat of ISIS in the strip is to the Palestinians themselves, who face the prospect of an ever bloodier existence.