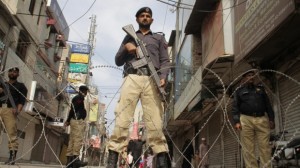 Security agencies in Pakistan’s business hub Karachi are looking for a network of female fundraisers for the terrorist group of the Islamic State in Iraq and Syria (ISIS).

Police say the group collects money in the name of Islamic charity.

Head of the Counter Terrorism Department of Sindh province told AFP news on Monday that the hunt was launched after police arrested the suspected financier of a gun attack on a bus that left 44 people dead in May.

The attack on the bus was later claimed by ISIS which was carrying members of the Shia community.

Raja Umar Khattab said one of the suspects arrested last week, who goes by the name of Adil Masood Butt, confessed to police that his wife had established a religious organization in the city called ‘Al Zikra Academy’ which does not have an organizational structure or office.

“The wife and mother-in-law of the main suspect of the carnage, Saad Aziz, were also part of the network.”

Saad Aziz who was arrested by police in May has been blamed for carrying out the carnage and killing Sabeen Mahmud who was a human rights activist.