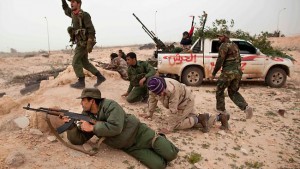 Five Libyan troops loyal to the internationally recognised government were killed Friday and another 18 are missing after an attack on an eastern checkpoint allegedly carried out by the Islamic State group (ISIS), a state news agency said.

A military source told the LANA agency, loyal to the recognised government, that “five soldiers were killed… and 18 other soldiers are missing in an attack carried out by the Libyan branch of the Islamic State group” on Friday.

He added that the attack was against a military checkpoint “located on the desert road between the two cities of Ajdabiya and Tobruk” in eastern Libya.

The place of the attack, according to the source, is just 170 kilometres (100 miles) from the headquarters of the recognised parliament in Tobruk.

Plunged into chaos after the 2011 overthrow and killing of dictator Moamer Gathafi, Libya has two parliaments and governments vying for power, as a slew of armed groups battle for control of its oil wealth.

Islamic State jihadists have taken advantage of Libya’s divisions to establish itself in the country, close to Europe’s shores.