You are here: Home / Europe / ISIS flags and photos of severed heads found among hundreds of migrants entering Europe 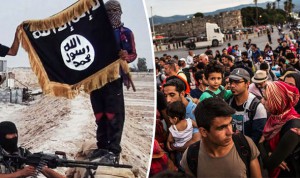 The chilling images were found by Norwegian officers searching migrants, sparking fears evil ISIS militants are still exploiting the migration crisis to sneak into the continent.

Officers also found sickening photographs of dead children along with other victims of terrorism and war.

Immigration cops in Norway are being forced to work long hours to deal with massive numbers of refugees.

Their shocking discoveries have included “photos and videos of executions and brutal punishments, such as images of people holding up severed heads or hands”, as well as images of dead children, Norwegian national press has reported.

It comes just weeks after it was revealed one of the savage ISIS jihadis who carried out the Paris atrocities used a Syrian passport with the name Ahmad Almohammad to enter Europe.

Officials believe the barbaric killer posed as a refugee to sneak into Europe before travelling across the continent to carry out the attacks which left 130 dead.

It also emerged that as many as eight migrants have reached Europe using travel documents almost identical to the Paris bomber’s.

Serbian authorities said they arrested a man carrying a passport with the same name, date of birth and place of birth and claimed up to six more men had entered the EU with remarkably similar authorisation.

Lord Green of Deddington, the chairman of campaign group Migrationwatch, said at the time: “This underlines the extent to which the southern borders of the EU is now wide open to fraud.

“It will take a huge operation to recover any controls worth the name. Meanwhile, the security risks of people carrying bogus passports around Europe speaks for itself.”

It was recently revealed that the depraved death cult – also known as Daesh – could be printing its own passports in a bid to slip into Europe again and commit further terror attacks.

US authorities warned ISIS has been able to print authentic-looking Syrian passports since taking over the city of Deir ez-Zour, which is home to a passport office with “boxes of blank passports” and a printing machine.

A report published by the Homeland Security Investigations said its source claimed “fake Syrian passports are so prevalent in Syria that Syrians do not even view possessing them as illegal”.

However head of Norway’s asylum programme Erik Haugland played down the terrifying discoveries of the images, which were revealed today.

He said: “There are several reasons why there may be such images. One is that they could have been a witness and want to show people what they have seen.

“Alternatively, they could have been carrying symbols associated with terror groups which they were passing through. Although it may look alarming, there may be other explanations rather than support for terrorist organisations.”