You are here: Home / Senza categoria / ISIS Filipino fighter urges Jihadists in Philippines to join ISIS in Iraq and Syria 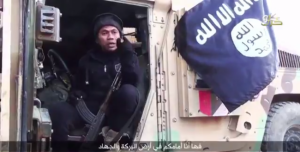 An ISIS-affiliated account on Twitter had posted last Saturday a short video footage of an unnamed ISIS fighter urging fellow Jihadists to join the ISIS militants in Iraq and Syria. The fighter in the video was mistakenly confirmed by IraqiNews.com to be a Filipino, however, it appeared to IraqiNews.com after the video was revised by our experts, that the information, which was posted on the ISIS-affiliated account on Twitter, was incorrect, as the ‘Asian-looking’ fighter is not speaking in Philippines language and of different nationality.

a Filipino ISIS fighter urged ISIS supporters in the Philippines to join ISIS militants in Iraq and Syria. The fighter, who has appeared in a video published by the ISIS’ affiliated al-Hayat Media Center and available below, is believed to be the same ‘Asian-looking’ militant who was identified by U.S. military sources as the Filipino ISIS fighter who had participated in the execution video of 16 Syrian pilots and Peter Kassig, a former U.S. Army Ranger that had volunteered as an aid-worker in Iraq.

In a short video message produced by the ISIS affiliated al-Hayat Media Center and published on an ISIS-related accounts on Twitter, the unnamed ISIS fighter from the Philippines has called his fellow Jihadists to join ISIS militants in Iraq and Syria. The fighter said in the 30-second video footage that was obtained by IraqiNews.com, “You’re saying there is no way to immigrate; all you have to do is to have hope and trust in God. And you will see how God will make it easy for you to immigrate; Here I am in front of you in the land of blessings and al-Jihad.”

According to ‘The ISIS Study Group,’ the ‘Asian-looking’ fighter was thought to be a Filipino and identified as an executioner in the ISIS video published on Nov 16th 2014, showing the execution of the Syrian pilots and Kassig, a U.S. former army ranger who worked as an aid-worker in Iraq before captured and beheaded by ISIS.

The Philippine Army spokesman Lt. Col. Harold Cabunoc had said that the military could not confirm whether the executioner is indeed a Filipino, however, the website ‘The ISIS Study Group‘ said in a statement received by IraqiNews.com “The recent ISIS execution video showing the beheadings of the Syrian pilots and Peter Kassig is extremely important due to the fact that a Filipino foreign fighter was involved in the execution of the pilots and Peter Kassig.”