You are here: Home / Europe / ISIS fighters could gain “legal” entry into EU, thanks to Europe’s new Schengen Visa deal for Turkey 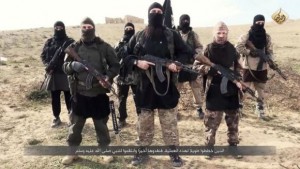 It doesn’t get any more backward than this. Potentially, this is the dumbest move yet by bureaucrats in Brussels.

Turkey is set to pick up a few big sweeteners from Brussels if it ‘tries’ to stop refugee flow into Europe – even though it’s nearly impossible for Ankara to actually come good on its lofty promise to ‘contain’ the large refugee flow through Turkey into the European promise land.

It’s true that Turkey has accommodated roughly 2 million Syrian refugees, and is said to have spent over nearly $8 billion on the crisis thus far.

What they are not telling us however, is that Turkey has been the primary facilitator of the Syrian conflict, mainly by hosting terrorist and ‘rebel’ training and equipping for tens of thousands of fighters since 2011, as well as providing a continuous safe haven for terrorist fighters – freely coming and going over its southern border with Syria.

The public got a shocking glimpse of the casual relationship between Turkish authorities and ISIS last year after video surfaced showing Islamic State militants having a friendly chat with a group of Turkish border guards near the besieged Syrian city of Kobane. The fact that Turkey is a NATO member makes this crime all the more egregious.

In short, Turkey is a “bad actor” in the Syria story. Now they are being rewarded with what essential has most of the features of a ‘fast-track’ provisional membership into the EU. Cries from European leaders like David Cameron to halt the flow of immigrants and to ‘not risk the security of Europe’ are sounding more hollow than ever right now.

The terms of this latest deal are almost unbelievable. Incredibly, EU official seem to be completely ignorant of the fact that most of the new ISIS recruits are now coming from Turkey. This completely insane new proposal from Europe effectively gives legal access into the entire EU for any Syria or Turkey-based ISIS and al Nusra Front terrorists who either have, or can acquire a Turkish passport.

With Russian airstrikes now crushing ISIS infrastructure in Syria, fleeing terrorist fighters are looking for an easy escape over Syria’s northern border into Turkey – and now, thanks to this deal from Brussels – they are one step closer to the streets of Europe.

Brussels appears clueless to the reality of what is happening on the ground in Turkey. This might be the stupidest move that the EU has ever made in its history.

Perhaps this is exactly what Brussels wants in order to erect the next phase of its technocratic security state?