You are here: Home / MidEastGulf / ISIS fighters believe they won’t go to heaven if killed by female soldiers 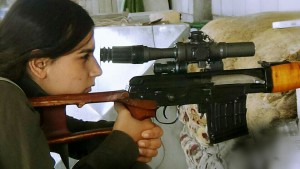 The Islamic State of Iraq and Syria (ISIS) fighters are afraid of girls and fear facing female soldiers, believing that they will be prevented to enter heaven if they are killed by a woman.

A militia commander in the Kurdish women’s unit dismissed the the ISIS fighters’ bravery and said “They think they’re fighting in the name of Islam.”

The 21-year-old commander fighting under the nom-de-guerre Tehelden which is Kurdish for ‘revenge’ told CNN’s Ben Wedeman “They believe if someone from Daesh [ISIS] is killed by a girl, a Kurdish girl, they won’t go to heaven. They’re afraid of girls.”

A 20-year-old fighter Efelin who is fighting in Tehelden’s unity said they will not even leave one of the ISIS fighters alive if they tried to attack Al-Houl again.

Efilin is stationed along with several other female Kurd fighters in Tehelden’s unity in Al-Houl which is about an hour drive to the southe of Al-Hassakeh in north-east Syria.

Mainly comprising Kurd fighters, the YPG has some 50,000 fighters including 20 per cent women. They have played a major role in fighting the ISIS fanatics in Syria and Iraq.