You are here: Home / Senza categoria / Isis fighter reveals group’s plan to spread even after defeat in Iraq and Syria and claims collusion with Turkey

In the last of a four-part series from Damascus, Patrick Cockburn interviews an Isis militant who claims the movement will rise again in North Africa, that Turkey turned a blind eye to shipments of weapons across the border and that Isis fighters are still present in Jarabulus 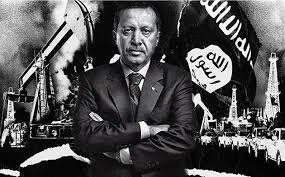 Isis will flourish and survive even if it is defeated in the present battle for Syria and Iraq an Isis militant has told The Independent.

In an exclusive interview, Faraj, a 30-year-old veteran fighter from north east Syria, says that “when we say that the Islamic State [Isis] is everlasting and expanding, it is not a mere poetic or propaganda phrase”. He says the group intends to rebuild its strength in Saudi Arabia, Egypt, Libya and Tunisia, adding that “Isis has sleeper agents all over the world and their numbers are increasing”.

In his account of his life in Isis, Faraj makes plain that only a year after the caliphate was declared in the wake of the capture of Mosul in 2014, its leaders could foresee that it might be overrun militarily. He reveals hitherto unknown details of the apparent close cooperation between Isis and Turkey and the degree to which foreign fighters who flooded into Syria to fight for Isis alienated local people from the movement by ordering them about and interfering in their lives.

Speaking through WhatsApp from outside Syria and asking for his real name to be concealed, Faraj says that when he first heard “from my emirs [commanders] that Isis would win even if it had been defeated militarily in Iraq and Syria, I thought they were just energising and encouraging us or they were just hiding their defeats.” But he soon found out that Isis leaders were taking practical measures early on to set up bases elsewhere in the world. A Libyan commander told him over a year ago that he was returning to Libya “for a certain mission and would be back in two months.”

It is significant that as early as August 2015, when Isis was close to its maximum territorial expansion, after capturing Ramadi in Iraq and Palmyra in Syria in May, it was already preparing for defeat. Faraj says that the world powers underestimate its resilience because they do not understand the attractiveness of Isis and its ideology to those who find the status quo unacceptable. He says: “I, like my commanders and comrades, fight in reaction to the tyranny and injustice I had experienced before.”

Faraj comes originally from a Sunni Arab village between the cities of Hasaka and Qomishli in the predominantly Kurdish north east corner of Syria. He is better educated than most Isis members, having graduated from the Faculty of Education at Hasaka University. He joined Jabhat al-Nusra along with his extended family in 2012. Known as the Syrian branch of al-Qaeda, Jabhat al-Nusra recently claimed to have cut any ties with al-Qaeda and rebranded as Jabhat Fatah al-Sham. However, when Isis fighters entered Faraj’s village and offered the young men a choice of leaving or joining them, he opted to join Isis.

His eyewitness account of developments within Isis and, in particular, its relationship to Turkey are revealing because they do not come from an embittered former Isis member trying to distance himself from his past. He says he is no longer a fighter, after differences with Isis that he does not explain, but “I am still an Isis supporter because I strongly believe in the wisdom or purpose behind its existence”. Interestingly, he finds Isis attractive not so much because of its extreme religious ideology but as an effective and well-organised vehicle for protest. He says: “Isis is the best solution to correct the wrongdoings of the authoritarian regimes in the region.”

Speaking of the Turkish military intervention in Syria which began on 24 August, Faraj helps explain a mysterious development which took place at the time. As Turkish tanks and anti-Isis rebel Syrian units moved into the border town of Jarabulus on the Euphrates River, Isis appeared to know they were coming and made no attempt to resist them. This was in sharp contrast to the ferocious resistance put up by Isis fighters to defend the Isis-held town of Manbij a little further south from attack by the Syrian Democratic Forces (SDF) whose fighting muscle comes from the Kurdish People’s Protection Units (YPG). Isis may have lost as many as 1,000 dead in ground fighting and US bombardment from the air.

It was reported at the time that Isis fighters had fallen back from Jarabulus towards their other stronghold in the area at al-Bab, but Faraj has another explanation. He says: “When the Turkish army entered Jarabulus, I talked to my friends who were there. Actually, Isis didn’t leave Jarabulus; they just shaved off their beards.”

He has compelling claims about the degree of complicity between Isis and Turkey a year earlier relating to the defence of Tal Abyad, another Isis-held crossing point between Turkey and Syria which was a particularly important supply route for Isis because it is 60 miles north of the Isis Syrian capital Raqqa.

In the summer of 2015, the YPG forces advancing from east and west with strong US air support caught Tal Abyad in a pincer movement, which made it difficult for Isis to defend the town. Faraj was part of a 150-strong Isis force resisting the YPG attack. “Turkey supported Isis a lot,” he recalls. “When I was in Tal Abyad in May, 2015, we received a lot of weapons and ammunition without any obstacles from the border guards.” This has long been an accusation by the Kurds, but this may be the first time that allegations of Turkish complicity with Isis during a battle has been confirmed by an Isis fighter taking part in it.

Turkish government officials have repeatedly denied any accusations of complicity in the actions of Isis, or that weapons are getting into the hands of the group via Turkey.

Faraj, as a Syrian Sunni Arab, is critical of both Turks and Syrian Kurds. He expresses dislike for the Turkish President Recep Tayyip Erdogan, but adds “he is much better than the Arab dictators”. At the same time, he holds Mr Erdogan “responsible for destroying Syria” by pursuing a conflict with the Kurds in Turkey that spread across the border into Syria and by “supporting Isis and pushing them into Syria”.

Defenders of Turkish actions argue that whatever tolerance for Isis by Turkey there may have been previously, the two have been at war over the last year. There have been repeated Isis attacks in Turkey, including one on Istanbul International Airport that left 42 dead and culminating in a suicide bombing of Kurdish wedding in Gaziantep on 20 August that killed 54, of whom 21 were children. But, despite Mr Erdogan’s anti-Isis rhetoric, the restrained reaction by Isis to the Turk invasion, of which it is the nominal target, suggests that the understanding between Isis and Turkey, so blatant in the past, may not be entirely dead.

Paradoxically, although Faraj has enthusiasm for the spread of Isis and its beliefs to foreign countries, he is very critical of the foreigner volunteers who came to Syria to fight for the self-declared Caliphate. He found these foreigners, including British, French and Turkish volunteers, surprisingly ignorant of Islam and local customs, often impelled by unhappy home lives or boredom, and only useful for propaganda and suicide attacks. Worse, their failings alienated Syrians who had previously supported Isis.

He says: “When Isis came, locals were happy and welcomed it. People believed that Isis will be their saviour, but psychologically and socially, they couldn’t accept foreign commanders in charge of their day-to-day lives. For instance, people in Raqqa complained when a Saudi emir used physical force to get a woman to wear a niqab. Any local will be annoyed when a stranger interferes in their life, not as a guest, but as a ruler who tells people to obey his orders. I was angry when a Tunisian man ordered me to go to the mosque and hit me on the back with a stick.”

Faraj finds some consolation in the thought that the behaviour of skilled but tough Turkish Kurd guerrilla commanders brought in by the YPG to give military advice to the Syrian Kurds in 2012-13 caused similar offence among local Syrian Kurds. The Turkish Kurd officers in charge of training had lived all their lives in military camps and “were harsh and had never experienced civilian life”. He suspects that Syrians supporting the government in Damascus react with similar hostility to being ordered about by their Russian and Iranian allies.

The war in northern Syria is very distinct from that in the rest of the country. Its main protagonists are Kurds, Arabs, Isis, the YPG and Turkey with only limited involvement by the government in Damascus. Faraj says that many Arabs in the area have joined Isis simply because they have been persecuted by the YPG. He cites as an example two cousins of his from the town of Tal Hamis on the Khabur river west of Hasakah who were killed fighting the YPG. Their houses in Tal Hamis were then confiscated by the YPG and the widows of the dead fighters were left with nothing “so their children join Isis to get revenge for their parents”.

This is the pattern all over Syria and Iraq. Protagonists may not love the side they are on, but at least it enables them to fight an enemy whom they fear and hate. He cites as an example one of his earlier commanders, a Kurdish emir named Abu Abbas al-Kurdistani, subsequently killed in battle, who had been imprisoned without trial and tortured in Iraqi Kurdistan for four years. Kurdistani said that Isis was ideal for himself because it was “the best option for oppressed people” and gave him “the opportunity to take revenge.” Nowhere in the interview does Faraj acknowledge the role that Isis atrocities have played, not just in Syria and Iraq but across the world, in creating a host of enemies for the movement who now encircle it and are threatening to overwhelm it.