You are here: Home / MidEastGulf / ISIS fighter dresses up as a woman in attempt to escape Iraqi forces

The man appeared to have been captured by an Iraqi soldier who is seen brandishing a large knife in the clip. 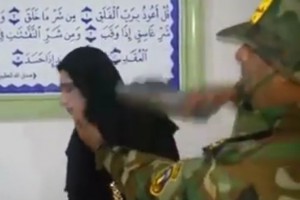 A video has emerged allegedly showing an ISIS fighter being punished after attempting to escape from Iraqi forces by dressing as a woman.

In the unverified clip, a man, who is thought to be a member of ISIS, is seen dressed in a traditional black dress and hijab, as he stands next to am Iraqi soldier.

He looks down at his feet while the soldier hits him across the face, while at the same time brandishing a large knife.

It is thought the footage was recorded recently in Ramadi, a city in Iraq approximately 68 miles west of Baghdad.

The video has surfaced several times on social media, and was also uploaded to Hassan al-Saadi Place’s Facebook page.

Place appears to claim that he is the Iraqi soldier in the footage, although this has not been verified.

A caption uploaded alongside the video yesterday reads: “Hassan Place arrested Daasha Saudi…disguised as a woman on the outskirts of Ramadi.”