You are here: Home / MidEastGulf / ISIS executes one of Its own top commanders on charges of ‘high treason’ 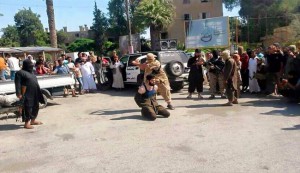 ISIS terrorist group in Syria’s northern province of Aleppo has beheaded one of its prominent leaders on charges of high treason in the city of Jarablus Thursday.

Terrorist group of ISIS on Thursday executed one of its prominent leaders on charges of high treason in the city of Jarablus in Syria’s northern province of Aleppo.

The media activist Nasser Taljbini said that ISIS beheaded Thursday its 40-year-old military commander Abu Mustafa in front of dozens of people in a public square in the city of Jarablus northern Aleppo on charges of fleeing the group’s ranks.

According to ISIS regulations, dissidence attempt from the groups ranks is regarded a ‘high treason’ and the perpetrator is being publicly executed.

“The ISIS-linked Hisba Police arrested Abu Mustafa two days ago near the Turkish border in the western countryside of Jarablus, while trying to flee to Turkey,” Taljbini reported.

“After his arrest, the Sharia Court decided to behead the man in public on charges of ‘high treason’,” eyewitnesses said Kurdish media, speaking on condition of anonymity.

Local sources confirmed that another top leader of ISIS from Jarablus was killed during confrontations with Syrian opposition factions in Aleppo’s northern suburbs.

On Wednesday, the ISIS senior leader, Abu Hadid, was killed along with six other militants during clashes with Syrian rebels in Aleppo’s north on the outskirts of the strategic town of al-Raee, Taljbini said.

He pointed out that the corpse Abu Hadid and his companions were brought to Jarablus on Thursday, while the place of their burial remains unspecified.

Over the past few months, hundreds of ISIS militants and military commanders have tried to escape the group’s ranks and head towards the European countries.