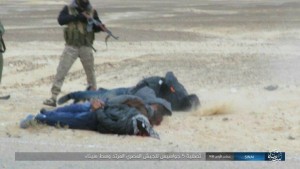 The Islamic State group in Egypt claims to have executed five men it accused of working for the army, which is battling the jihadists in the Sinai Peninsula.

In a series of photos published Friday on the secure messaging app Telegram, five men presented as army “elements” are seen lying face down on the ground before a militant shoots them in the back of their heads with an assault rifle, the SITE intelligence group said, according to france24.com .

Jihadists have killed hundreds of soldiers and policemen since the military overthrow of Islamist president Mohamed Morsi in 2013 unleashed a bloody crackdown on his supporters.

Most of the attacks have taken place in the Sinai Peninsula, which borders Israel and the Gaza Strip, but attacks have also been carried out in other areas including Cairo.

The Egyptian army announced on Friday that it had killed “500 terrorists” since it launched a wide-ranging security operation in the Sinai in September 2015.

In October 2015, IS claimed the downing of a plane carrying Russian tourists home from the Sinai resort of Sharm el-Sheikh, which killed all 224 people on board.