You are here: Home / MidEastGulf / ISIS executes 12 of its own fighters for trying to flee Mosul 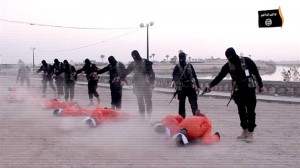 The Islamic State (ISIS) radical group has executed 12 of its own militant fighters in northwestern Iraq for trying to flee the group’s strongholds in Mosul city of Nineveh Governorate, local sources reported to aranews.net.

The militants were reportedly arrested by ISIS guards in western Mosul while trying to flee to the eastern part of the city–which is now held by Iraqi security forces.

The 12 jihadi fighters were publicly beheaded in the Zanjabili neighbourhood in western Mosul.

This comes one week after ISIS executed six of its own fighters in the town of Margada in northeastern Syria for escaping the battlefield in Deir ez-Zor Governorate.