You are here: Home / MidEastGulf / ISIS execute German jihadi who converted to Islam to join terror group for ‘spying’ 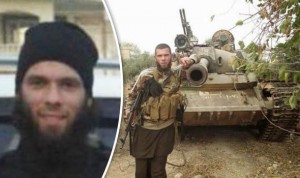 Mario Sciannimanica’s mother was contacted by terrorists in Syria earlier this year to say he had been killed in an American air strike.

But now it is revealed he was executed by the fanatics he converted to Islam for. Accused of treason, he was either beheaded or shot.

The boy from Leverkusen who fell into radical Jihadism three years ago was a member of the Isis security police Shurta Askeriya.

He fell into the ranks of Jihadists after an apprenticeship as a mechanic failed to land him a job. His parents spoke of false friends, rap, girl-chasing and dreams of getting rich before he started attending a radical mosque.

According to media reports, he was preached to down the phone by a Salafist called Ibrahim Abou-Nagie, recently banned from handing out Korans on German streets.

He became so fanatical that he abandoned his faithful pet dog Luna because it was “unclean.” It was not long afterwards that he dreamed of joining the ranks of Isis.

“He said often he wanted to go there and help Muslims,” said his mother Heike Sciannimanica to German newspaper Bild. “He asked his girlfriend to go with him but she decided to remain in Germany.”

In northern Syria in 2013 he trained in a military camp and registered as an Isis fighter. He stayed in contact with his parents back home via Skype – but only on the condition that they swore allegiance to Islam.

“We did because we did not want to lose contact with him,” said Frau Sciannimanica. “But it meant nothing to us.”

He called himself Lionheart on social media postings to friends back home. But he begged his parents for money and, again fearful of losing him forever, they obliged.

His home was searched many times by intelligence officials and police, the last time in March this year when they believed he had returned home. The following month they heard from him for the last time when he again wrote seeking money.

In June they heard that he had been killed in the air strike on an Isis convoy. But Bild says it has received information from an Isis source that he was accused of spying against them in Mosul, received a hurried trial and was put to death by his former comrades.