You are here: Home / Europe / ISIS ‘evolving tactics’ could include car bombs in Europe 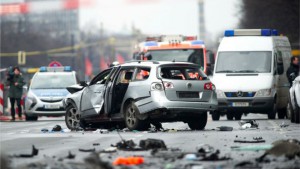 Terror networks such as the Islamic State group [IS] are evolving their tactics to attack soft targets in Europe, which could see the use of deadly car bombs, Europol warned on Friday.

Attacks on EU member states have not yet involved “the use of home-made, commercial or military explosives in vehicle-borne improvised explosive devices” as in Syria or Iraq, Europe’s police agency said in a report issued in The Hague.

But “given the fact that the (techniques) used in Middle Eastern countries tend to be copied by terrorists operating in Europe… it is conceivable that jihadist groups will use this means at some stage,” it said.

The group responsible for attacks in Paris a year ago and in Brussels in March wanted to deploy such devices until police actions forced them to change their plans, the report said.

The extremists massacred 130 people in November 2015 in attacks on the Bataclan concert hall, a handful of bars and restaurants in eastern Paris, and France’s national stadium.

In Belgium, suicide bombers struck Brussels airport and a metro station near the European Union headquarters on March 22, killing 32 people.

The 14-page report, an update on methods and tactics used by IS, also said counter-terror experts were concerned that strife-torn Libya could develop into a “second springboard for IS, after Syria, for attacks in the EU and North Africa”.

Since the armed revolt five years ago that overthrew dictator Muammer Gaddafi, the North African country has been plagued by violence and political instability.

“Experts expect that IS will start planning and dispatching attacks from Libya if the current phase, in which they are primarily focused on taking territory and dispatching of local enemies, comes to an end.”