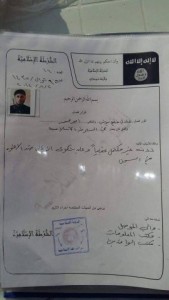 Documents seized by security forces from former Islamic State facilities in Mosul have shown that several militants nominated for joining the extremist group’s police service were disqualified for several reasons that ranged from sexual harassment history to mental deficiencies.

The documents, which were circulated by social networks users, and the authenticity of which could not be verified, carry disqualified members photos, group’s main logo and the so-called “Islamic Police”’s seal.

The reasons for the disqualification of the members, which are shown in a handwriting, ranged from frequenting brothels, drinking alcoholics, having a sexual harassment history and exhibiting signs of mental normality.

The Islamic State emerged in Iraq and Syria in 2014, conquering several cities in both countries and proclaiming the establishment of a self-styled “Islamic Caliphate”. Since then, the group reportedly imposed extreme religious rules on citizens subject to its rules, deployed vigilantes to ensure the rules were abided by and carried out executions and harsh punishments against violators.

Islamic State has reportedly been crumbling over the past few weeks as Iraqi security forces advanced closer towards the liberation of Mosul, the group’s last major stronghold in Iraq. Reports have been rampant about divisions and an atmosphere of mistrust among members.