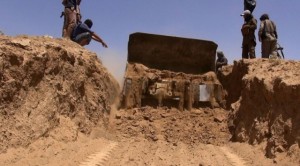 Iraqi media outlets revealed on Monday that ISIS dug trenches inside the city of Mosul in anticipation of the imminent liberation battles.

According to Iraqi media outlets, a military source said, “ISIS finished digging trenches between the areas of al-Shalalat and al-Nourat.”

From his side, Geological Expert, Dr. Raouf al-Zahawi said, “The soil of Mosul is rocky and filled with groundwater, and this will allow ISIS to only dig for a meter and a half and then the trenches will be filled with water,” adding that, “The trenches will be useless and will only increase the sabotage of infrastructure.”

Noteworthy, the Iraqi army forces backed by the US-led coalition are now preparing for an ultimate assault in October, in order to oust ISIS out of Mosul, while ISIS called on residents of the city to stay inside their homes starting next month and abide by a comprehensive curfew.