You are here: Home / Senza categoria / ISIS developing deadly, undetectable chem weapons for use in terrorist attacks in malls and sports stadiums 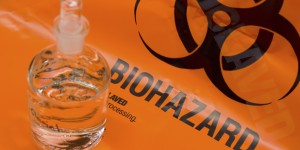 The Islamic State (ISIS) is developing deadly colourless and odourless chemical weapons which could cause mass casualties and total chaos when used by terrorists in attacking malls and sports stadiums in the West, experts revealed.

The deadly gas has the potential to kill thousands in a confined space before authorities could be alerted on what was going on, the Daily Express reported.

Evidence of the poisonous chemicals, also called dirty bombs, was uncovered when Kurdish fighters with horrific burns and blisters on their skin were photographed. Experts believed that ISIS militants used captured Kurdish fighters as guinea pigs to test their experimental weapons.

Western intelligence officials monitoring ISIS in Iraq have expressed concern that the terrorist group could use its suicide bombers to release the undetectable poisonous chemicals in public venues to kill thousands.

Former FBI intelligence agent Timothy Gil said ISIS is using laboratories in Iraq, Syria and Libya to constantly improve and perfect its dirty bombs so that they can cause the maximum possible casualties.

He warned that ISIS could use social media or its returning fighters to share its expertise on making dirty bombs with radicalised Muslims in Europe and the U.S., who then would be asked to carry out terrorist attacks.

Kurdish poison gas survivors have revealed that they were caught unaware that they had been subjected to chemical attack by ISIS militants since they neither saw nor smell the poisonous fumes.

A doctor working on the Kurdish frontline told Fox News that the group’s latest dirty bombs emitted gases which are “odorless, colourless and absorbed through the clothing,” often only causing burns or illness hours after they were breathed in.

He said the ISIS jihadis were using Peshmerga fighters as “lab rats for weapons of mass destruction,” adding that he had seen cases of “mustard gas, precursors and neurotoxic acids being tested.”

Former FBI intelligence officer Timothy Gil said the ISIS is using safe havens in Syria, Iraq and potentially Libya as laboratories to learn how chemical agents impact the battlefield, with the goal of sharing their expertise via social media with ISIS followers worldwide.