You are here: Home / MidEastGulf / ISIS deploy teen suicide squad, young boys between the ages of 14 and 17 years, heavily armed and masked 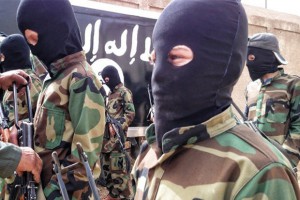 ISIS has deployed a masked brigade of heavily-armed young boys – thought to be between 14 and 17 years old – north of Baghdad, in Iraq.

The teen terrorists – brainwashed at a training camp in the militants’ stronghold of Mosul – have reportedly be brought in to raise morale after recent setbacks.

The sickening child abuse – which follows reports the so-called caliphate is preparing female suicide bombers to defend its de facto capital of Raqqa, in Syria – may be a further sign the twisted death cult is getting increasingly desperate in the face of Russian bombing.

A local source told Iraq News: “The ISIS organisation has deployed a number of elements of what is known as Caliphate Battalion in some areas of Sharqat, in northern Salahuddin.

“The elements were young boys between the ages of 14 and 17 years – heavily armed and masked.

“Some elements of the battalion were wearing explosive belts.

“ISIS has brought them from one of its camps in Mosul in order to raise the morale of its fighters in Sharqat after the fall of Baiji.”

ISIS has horrified the world after forcing children to execute prisoners and encouraging toddlers to copy its sick beheadings.

But the group has suffered a number of recent setbacks – including the loss of prominent member, former German rapper Denis Cuspert in an airstrike.