You are here: Home / Analysis / ISIS ‘cubs’… a ticking time-bomb 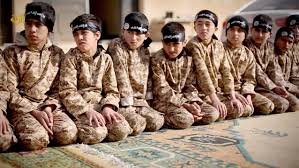 ISIS Terrorist group released a video earlier this month featuring two recruited Yazidi kids before they launched a suicide operation. The video sheds the light on ISIS‘s ongoing children recruitment policy, which saw a major rise since the operations to liberate Mosul kicked off, like reported by aawsat.com .

In the video, the two Yazidi children explained how they joined Islam and spoke about the training and guidance they received by the extremist group. As cited by an Iraqi website, one of two children, named Amjad, claimed that Yezidism is like following the devil, and represents a state of ignorance and heathenism. Both children received the organization’s ideology in the so-called “ISIS’s Institution”, before they were moved to a training camp in Syria, where they pledged loyalty and obedience to the local leaders. The children were filmed with a group of suicide bombers and later appeared standing on a massive armor that was loaded with bombs before exploding it.

Since the launch of Mosul operations in western Iraq, the Syrian Observatory of Human Rights estimates that among the Syrian children recruited by ISIS there are 300 who died while fighting in Iraq in October. A report published by the CTC Sentinel – issued by the US Combating Terrorism Center at West Point – stated that children recruitment rapidly grew between 2015 and 2016. According to CTC’s statistics, ISIS mourned 89 children and juveniles between 1st of January 2015 and 31 January 2016 – 51% were killed in Iraq and 36% in Syria, while the rest of them were killed in Libya, Yemen, and Nigeria.

Based on the pictures shared by the organization, 60% of these recruited members were children, 34% were teenagers, and 6% were pre-teenagers. As per nationalities, 31% were Syrians, 25% were Syrian-Iraqis, and 11% were pure Iraqis. The other 33% were from Yemen, Saudi Arabia, Tunisia, Libya, the United Kingdom, France, Australia, and Nigeria.

According to the Counter-Terrorism Center’s study, among the 89 documented cases, 39% died after exploding a bombed car, 33% while fighting in random battles, 6% while working as preachers in units, and 4% exploded themselves to target civilians – the 18% left were killed in special operations in which they fought using light weapons before bombing themselves.

The given data emphasizes an accelerated pace of children and juveniles’ recruitment, as the number of young children who were killed in suicide attacks rose from 6% in 2015 to 11% in 2016. According to the report, suicide bombing witenessed a triple rise in January 2016 compared to that of the same period in 2015. Subsequently, operations implemented by children have become more common for ISIS amid the growing pressure it has faced in its strongholds over the past few months. Not to mention that suicide bombings have become an efficient tool in the organization’s psychological warfare against its enemies.

On another hand, a study conducted by Dr. Jacob Olidort, fellow at the Washington Institute for Near East Policy shows that ISIS’s efforts in teaching children its ideology eases the dedication of this loyalty by the coming generation. According to Olidort, ISIS’ curriculum can be divided to two parts: the first covers the traditional subjects related to religious studies like Quran, Hadith, ideology, jurisprudence, belief’s characteristics and practices in Islam – while the other part covers other subjects like physical readiness, history, geography, and mathematics, which are considered secondary interests for the Islamic identity of the organization and its alleged “Caliphate” project.

In ISIS’s world, school-books condemn western democracies and explain the differences among believers, non-believers, and Muslims who support the West and oppose ISIS. Olidort sees that the organization also uses these books to justify its violent approach and to emphasize the importance of killing to achieve religious goals. The study further shows how ISIS uses books to distort children’s perspective towards the world by stressing the duty of religious authority and the importance of fighting Muslims who disobey the Islamic Sharia.

In his study, Olidort noted that the organization begins the children training by encouraging them on spying and telling the ISIS group about their family members and friends who violate ISIS’s laws or criticize its alleged state.

In July 2015, the Daily Mail reported that ISIS released a video featuring a group of children wearing army customs, while shooting 25 soldiers from the Syrian army in the city of Palmyra – this video came following three others which screened children training on taking captives, setting ambushes, and snipping.

ISIS works on attracting these children in schools by offering candies and toys, and then focuses on washing their brains. A captured ISIS member said he joined the organization when he was 14 years old, and now after seven years spent in its ranks, he raped 200 women and killed around 500 people.

Subsequently, such cases have urged to prepare special programs to reintegrate children who grew under the control of ISIS.Centers to rehabilitate recruited children are a must in countries suffering from ISIS-led wars like in Syria and Iraq.