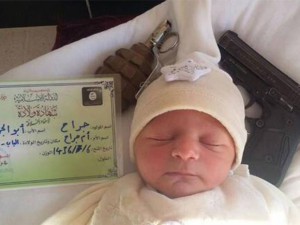 An Isis propaganda photo of a newborn baby lying beside lethal weaponry and a birth certificate, intended to provoke shock and fear, has emerged online.

The startling image of the infant appearing to sleep next to a grenade and a handgun was shared by Abu Ward Al-Raqqawi, an anti-Isis activist in Syria, who said it was originally taken by a member of the extremist group which has established a so-called Islamic State across swathes of Iraq and Syria.

#ISIS issued ID for a child Name: Jrah Dad: Abu Jrah Mom: Om jrah This child will be risk to you not just to us . 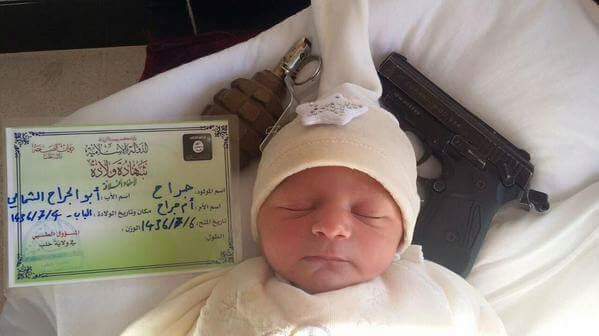 Al-Raqqawi captioned the photo with the warning: “This child will be risk to you not just to us [sic]”, suggesting it is an attempt by the extremists to showcase their attempts to cultivate ever-younger members in their ranks.

Late last year, the group used its official media outlets to circulate videos and images claiming to reveal like in the “School of Jihad”, where per-pubescent children 10 are trained to use AK47 rifles and are acclimatised to the horrors of war.

The image has not been independently verified, however a terrorism expert at the Australian National University told Daily Mail Australia that he believes it is authentic.

“By showing the birth certificate, and the fact that the group are indoctrinating babies, I think ISIS are indicating they will be around for a long time,” he said.

“It’s an interesting signal of life within the caliphate. Obviously by posting opposition to the Islamic State from within their borders the activist is operating with great risk.”

The image was shared as the complex fight to reclaim territory captured by Isis continues. Over the weekend, a Washington-led coalition carried out three air strikes against Isis militants in Syria near Al Hasakah, Dayr Az Zawr and Kobani, according to a US military.

A further 17 strikes against the group in Iraq hit Isis positions near Fallujah, Al Hawayjah, Bayji, Mosul and Ramadi, the military added in a statement.

Last week, a senior commander in the Iraqi army claimed that his forces had killed hundreds of Isis militants and re-taken territory in Anbar province, where Isis had launched a counter-offensive in recent weeks.

Lieutenant General Abdul Amir al Shammari told Sky News his forces had killed “more than 250 terrorists in the past few days” without the help of the Iraqi military and coalition airstrikes.