Two top officials from the jihadist group fled Al-Boukamal in recent days, sparking a campaign of arrests in the town that lies near the Iraqi border 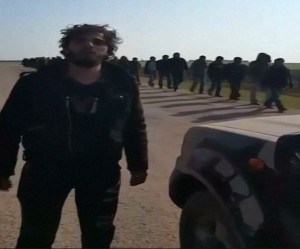 ISIS has conducted a security crackdown in Al-Boukamal after local officials in the jihadist group fled the eastern Syrian town near the border with Iraq, according to opposition media.

All4Syria reported Tuesday that ISIS launched a “wide-scale campaign of arrests” after the Wali (leader) and top health official in Al-Boukamal deserted the jihadist group last month and fled to an unknown destination.

ISIS arrested a number of Hisbah religious police members as well as other security officers on charges of “facilitating the dissident leaders’ escape” the pro-rebel rebel outlet added.

The report explained further that the arrests were authorized by the Islamic Court judge in Al-Boukamal, an Egyptian national, due to the top security posts in the city remaining vacant amid the recent shake-ups.

ISIS earlier detained its most prominent security official in Al-Boukamal, Abu al-Haytham, on suspicions of helping the city’s Wali, Mohammad al-Murshid, escape a little over a week ago, according to activists speaking to the pro-opposition Smart News Agency.

An anti-ISIS activist group, Deir Ezzor 24, for its part, said on October 2 that the extremist organization “arrested a number of security personnel” after Murshid, a Saudi national, fled for whereabouts unknown.

On September 27, the group claimed that Murshid stole an estimated $800,000 funds and left the town with his family and bodyguards.