You are here: Home / MidEastGulf / ISIS could kill thousands with ‘biblical’ weapon 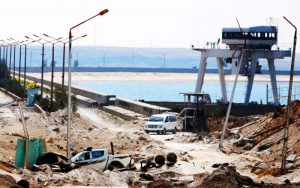 On the night of March 21, 2017, U.S. military helicopters airlifted fighters from the Syrian Democratic Forces rebel group in a daring attack on a strategic dam outside the town of Tabqa, just 20 miles west of Raqqa, the de facto capital of ISIS’s self-declared “caliphate” in central Syria, like reported by thedailybeast.com.

“Seizing Tabqa dam will isolate Raqqa from three sides and give the SDF the strategic advantage and launching point needed for the liberation of the city,” the headquarters of the U.S.-led coalition stated.

As both sides settled in for a potentially lengthy siege, their respective propaganda arms flew into action. By all accounts, the ground combat at the Tabqa dam has ebbed. But the war of words is escalating quickly, as the SDF and ISIS try to leverage for their own gain the dam and the millions of gallons of water in Lake Assad that it holds back—and activist groups add their own alarm and accusations to the turbulent flow of information.

It’s not clear who’s telling the truth. Both combatants would have the world believe they are trying to preserve the dam, while their enemy aims to cause its failure—and send a wave of water crashing downstream.

The battle over Tabqa and its dam was long in coming. Since early in the civil war, ISIS has dominated, sparsely-populated central Syria—including the town of Taqba and its roughly 60,000 residents. But for the first three years of the conflict, the Syrian government managed to hang onto an air base just outside of Tabqa.

The town is a kind of buffer on Raqqa’s western side. The dam supplies electricity to the city’s hundreds of thousands of residents, including potentially thousands of ISIS fighters. The militant group has also used the dam as a headquarters, training facility and makeshift prison, according to the coalition.

Even after the recent SDF assault, ISIS still controls the main portion of the dam, including the control room. The rebels hold ground on both ends of the dam that includes several spillways—relief valves that can release water from Lake Assad in order to reduce pressure on the dam itself.

The SDF’s control of the spillway—and the near-constant presence of U.S. and allied warplanes in the sky over Tabqa and Raqqa—give the coalition a great deal of control over the dam’s fate, and thus the fate of Raqqa and other downstream communities.

If the dam fails, either from neglect or as a result of a deliberate attack, water from Lake Assad could inundate Raqqa and kill or displace thousands. The United Nations warned that flooding from a dam breach could be “Biblical” in scale. That would certainly make the coalition look bad and undermine whatever popular support it enjoys in Syria.

But if the dam is a weapon, it’s a two-edged one—with potential to harm both the enemy and the wielder, as both seek legitimacy with the local populace and neither can be sure who the local people will choose to blame for any flood.

ISIS and the coalition both surely appreciate this truth. In 2014, the militant group briefly controlled a huge—and, according to some experts, structurally unsound—dam outside of Mosul in Iraq. Tellingly, ISIS made no obvious attempts to weaken the dam, and today the giant structure is under Iraqi control and receiving extensive repairs.

In the days following the SDF’s advance on Tabqa, water and power in Raqqa abruptly shut off. A rumor spread through Raqqa that the Euphrates dam’s systems had stopped working and the whole structure was in danger of collapsing. Activists from the Syrian Observatory for Human Rights claimed they “monitored a state of confusion and panic” in Raqqa—and that so many people tried to flee the city that ISIS patrols couldn’t stop them all.

The outages and worry over the dam’s condition have taken their toll on Raqqa residents. “Resentment is prevailing,” the observatory reported.

Raqqa Is Being Slaughtered Silently, an anti-ISIS activist group in Raqqa, claimed that the SDF—and, by extension, the U.S.-led coalition—was trying to encourage the resentment and presumably direct it at ISIS by deliberately bombing the dam and undermining accurate reporting on the structure’s condition. “It seems that the coalition [doesn’t] want the engineers to repair the dam, so [it] can make it as a pressure tool on ISIS,” Raqqa Is Being Slaughtered Silently tweeted on March 28.

ISIS has encouraged the perception that the coalition is trying to make people Raqqa afraid of the dam, apparently hoping the coalition’s apparent propaganda campaign will backfire.

On March 26, the pro-ISIS Amaq news agency circulated imagery it claimed depicted the aftermath of a U.S. air raid on the dam’s control room. The imagery included shots of an apparently fire-damaged control panel, as well as pictures of what appear to be fragments of an American-made BLU-109, a kind of bomb designed to destroy heavily-protected targets—including, yes, dams.

But Tom Cooper, an independent expert on Syria and the author of several books on Middle East air wars, told The Daily Beast he doubted ISIS’ claim that the Americans had dropped BLU-109s on the control room. “My impression is that the damage inside the control room is not consistent with hits by such weapons,” Cooper said. “Everything inside would’ve been smashed by them, not only burned.”

The U.S.-led coalition admitted to conducting more than 300 air strikes in and around Tabqa and near Raqqa since December 2016, but denied targeting the dam. “The coalition is taking every precaution to ensure the integrity of Tabqa dam,” the headquarters tweeted on March 27. “To our knowledge, the dam has not been structurally damaged.”

Indeed, the SDF claimed its forces worked quickly on March 29 to repair damaged spillways it controls near Tabqa, pausing only to take cover from ISIS shelling.

But when the SDF tweeted a picture it claimed showed its personnel inspecting a spillway or similar facility, Raqqa Is Being Slaughtered Silently insisted the photo was fake. “It’s a lie,” the group tweeted. “This is not the Euphrates dam.”

ISIS rejoined the propaganda battle on March 28 when it made a show of negotiating a brief ceasefire with the SDF in order to bring in Ahmed Al Hussein, the dam’s overseer, to inspect the structure it claimed the coalition had damaged.

Tragedy struck—or so Raqqa Is Being Slaughtered Silently would have the world believe. The activist group reported that a coalition air raid struck the dam during Al Hussein’s visit, killing the overseer. The Daily Beast could not independently verify Al Hussein’s death.

In allegedly attacking the dam and covering up the attacks—ostensibly in order to undermine local support for the Islamists who control the main part of the dam—the coalition is “risking the lives of millions of people in Raqqa and Syria,” the activist group tweeted.

Or maybe ISIS is responsible for risking those lives as it tries, clumsily at times, to pin blame for the dam’s potential failure on the rebels and their American backers—if indeed the dam really has suffered major damage.

In the verbal scuffle over a strategic dam overlooking the Islamic group’s capital and final stronghold, the claims come rapid-fire. The truth is one possible casualty.