You are here: Home / Mediterranean / ISIS could expand from Libya 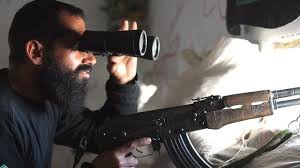 The Islamic State group has built a base in Libya from which to exploit tribal conflicts and expand across Africa, though experts say the jihadists remain vulnerable even if the West’s attention is elsewhere.

Libya’s collapse into a chaotic mess of competing militias since the overthrow and death of dictator Muammar Gaddhafi has made it an ideal stomping ground for ISIS.

ISIS jihadists gradually built up control of several towns that were of minimal interest to other militias, most notably Gaddhafi’s coastal home town of Sirte, east of Tripoli.

Libya not only offers an alternative base if the group is forced out of Syria and Iraq, experts fear it could also take advantage of tribal conflicts to expand south into the Sahel desert region of central Africa, particularly Chad, Niger and Sudan.

“ISIS is provoking tensions and making alliances,” particularly between the competing Tuareg and Toubou tribes, said Kader Abderrahim of the Institute of Strategic and International Relations in Paris.

For now, ISIS has only a limited foothold in Libya, but it is enough to project violence into neighbouring countries, particularly Tunisia where the group has claimed three attacks this year.

“Tunisia is the most threatened,” said Abderrahim. “The terrorists cannot accept the idea of a functioning democracy just a few dozen kilometres away.”

Libya also lies just 800km across the Mediterranean from Italy, and is a route for thousands of refugees — another weakness ISIS could exploit.

“There is still this old historical fantasy of reconquering territory they held in Spain… of returning Andalucia to before the Middle Ages,” Abderrahim said.

Libya nonetheless represents a much less hospitable environment for ISIS than Syria and Iraq.

“Libya without a state is not really a functioning place. ISIS in Libya would be vulnerable to the same problems as the Gaddhafi regime – including the need to import 70% of its food – and there’s a much smaller population from which to extort revenue and taxes,” said Geoff Porter, head of the US-based North Africa Risk Consultancy.

“Were they to be eradicated in Syria and Iraq, they could try to relocate the bulk of their activities to Libya, but they would be a potentially more manageable threat.”

Libya’s long coastline and desert plains leave ISIS vulnerable to outside attack, said Frederic Wehrey, a senior associate with the Carnegie Endowment for International Peace who visited several cities there in September.

But as in Syria and Iraq, the problem for the West is finding partners on the ground to fight ISIS.

“The Libyan actors that are capable of confronting the Islamic State are not really doing so for reasons of capacity but also of will,” Wehrey said.

“They’re holding the line, but both the main factions have other priorities.”

Libya has two governments vying for power – a militia alliance including Islamists that overran Tripoli in August 2014, and the internationally recognised administration that fled to eastern Libya.

Western efforts have focused on fostering a reconciliation between the two sides, hoping they will then turn their firepower on ISIS and other jihadist groups, but months of UN-brokered talks have made little progress.

For now, ISIS has been held in check by the “super-abundance” of armed opponents in the country, Porter said.

It was driven out of the city of Derna in June by an Al-Qaeda affiliate and is jostling for control in other areas.

“It is not threatening the entire country,” added Wehrey. “But it has a beach-head and the human catastrophe of the civil war is fertile ground for them to expand.

“We are already seeing jihadists from older groups defecting to the Islamic State, which has a powerful brand.”

Despite the threat, there is little chance the West will intervene in Libya any time soon while attention is almost entirely focused on Syria.

Italian Prime Minister Matteo Renzi has been one of the few leaders to focus on Libya, warning last week that it could be the “next emergency”.

The United States has been quietly targeting IS in the country, claiming to have killed its Libyan leader, Abu Nabil, with a drone strike on a compound in Derna on November 13.

But ramping up its military involvement remains highly unlikely with the US presidential election less than a year away, Porter said.

The Republicans have been desperately seeking to tarnish leading Democratic candidate Hillary Clinton over her handling of the Libya crisis while she was secretary of state – particularly the death of US ambassador Christopher Stevens in 2012.

“With Clinton as frontrunner, the White House will avoid anything that will propel Libya to the front of the news cycle,” said Porter.