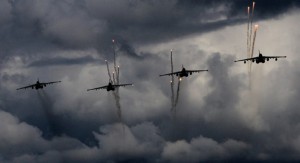 According to a report from the Deir Ezzor Military Airport, the Russian Air Force conducted 6 airstrikes over southwest Deir Ezzor, killing a large number of terrorists and destroying their armored vehicles that were mounted with a variety of anti-aircraft machine guns.