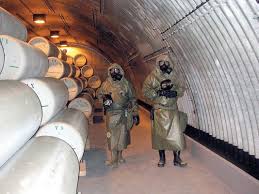 While the US Obama administration is considering starting up a new frontier against ISIS in Libya, in efforts of ending the option of terrorists establishing a new center and taking advantage of the state of chaos there, the pentagon began preparing for options of military intervention.

The US Secretary of Defense claimed that action should be taken before Libya is turned into harbor for ISIS extremists, and before complication upturns, in terms of removing them from the country, Agence France-Presse reported.

The US Secretary of Defense revealed that the aftermath of extremists influx into Libya can be compared that with Iraq and Syria, and stated that all efforts should be spent for the situation to be contained in prevention of it escalating like what had happened to the latter mentioned.

Informed sources revealed to Asharq Al-Awsat that the Sarin gas is a compound chemical forbidden by the international law and stated that its a chemical that nerve agent developed into weapons of mass destruction, is present in Libya.

Worth noting that sites rich with Sarin gas storage in Libya are at a majority under control of ISIS extremists.

Furthermore, sources revealed that zones known for holding the highest percentages of Sarin gas storage in Libya like al-Nakhlat compound, located in the Bab al Huriya area, are infested with armed ISIS militants.

Statements came in, on militants stealing large excesses of the nerve agent and sending it to their fellow ISIS militants in the city of Sirte, located halfway between Tripoli and Benghazi, in cargo dispatched under the name of “Al-Rabita merchandise”. Al-Rabita is a mountainous city famous for palm trees and streams of water.