You are here: Home / Mediterranean / ISIS claims responsibility for suicide bombings that killed 37 in Beirut 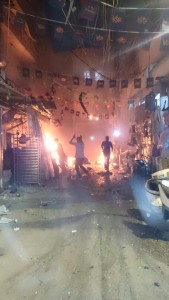 The group said in a statement posted on Twitter by its supporters, that its members blew up a bike loaded with explosives in a street in the Borj al-Barajneh area and when people gathered, a suicide bomber blew himself up among them causing more casualties and killing 40 people.