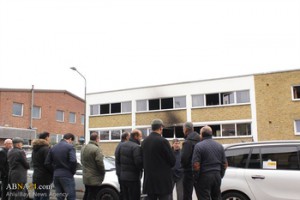 To Swedes’ astonishment, a recent arson attack in the city of Malmö that only caused damage, injured no one and was barely reported in the media has been claimed by Daesh (ISIS/IS).

On October 11, a fire broke out in a Shia prayer house in Malmö, Sweden’s third largest and most multicultural city. Police believed that the fire was caused by Molotov cocktails which were thrown inside through broken windows. The event was largely overshadowed by the massive explosion that hit the Babel night club on October 10.

The latest edition of Daesh magazine al-Naba claimed that the fire was started by “a warrior from the caliphate” in “crusader country Sweden,” the Swedish tabloid newspaper Aftonbladet reported. The article also claimed that the prayer house was used by “infidels”, whereas the attack itself was carried out “on the instructions of the leader al-Adnani,” a Daesh spokesman who previously called for terror attacks against the West prior to his death during an airstrike in Aleppo, Syria.

According to Swedish terrorism expert Magnus Ranstorp at the Swedish National Defense College the terrorists’ claims should be taken with a grain of salt.

“I don’t think it will be possible to establish that they are involved. They’ve got a habit of taking responsibility for everything. They tend to claim responsibility for terror attacks they have nothing to do with,” Ranstorp said. Terror expert Hans Brun of King’s College London, told Svenska Dagbladet that it was remarkable that al-Naba had heard about the attack at all.

“This incident hasn’t received a lot of attention in either Sweden or internationally as far as I’m aware. The question is how they got access to this information. They must either have been tipped off about the incident or have had contact with the person or people who did it. I’m surprised that they should mention such a trifling incident in the first place. As far as I’m aware nobody was injured. It was hardly a global news event,” he said.

Both Ranstorp and Brun emphasized that there was a deep conflict going on between Daesh and Shia Muslims. However, it is the first instance of this skirmish happening on Swedish soil.

Swedish security service SÄPO would not comment on the issue despite the fact that Sweden previously emerged as one of the EU’s foremost exporters of terrorism, with one of the highest rates of extremist takfiris (jihadists) per capita, surpassed only by Belgium.

Malmö is often hailed as Sweden’s “most multicultural city,” with 174 countries and over 150 languages represented. Up to half of Malmö’s population of 300,000 have a foreign background. The Middle East and the Horn of Africa are the main sources of immigration. The number of Swedish Muslims is a subject for debate, since religious profiling is considered offensive. Estimations, however vary between 100,000 and 500,000, which account for up to 5 percent of Sweden’s population. The majority of the Swedish Muslims are Sunni.