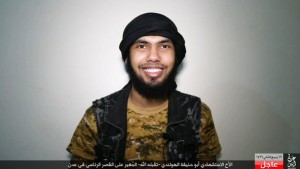 An Islamic State suicide bombing in Yemen that killed six people is believed to have been carried out by a Dutch fighter.

The terrorist group claims that the explosion, which happened on 28 January outside the presidential palace in Aden, was carried out by a Dutchman called Abu al-Hunaifa, The Post reported.

IS (Isis/Daesh) also released a picture of the man it claims is Al-Hunaifa, adding that it has proof that he was responsible for the bombing.

Among those killed by the attack were soldiers, Al Jazeera Arabic reported, while there are also believed to be 15 people injured following the blast.

The bombing comes just hours after three Al Jazeera journalists were released after being taken hostage in Taiz in Yemen and held for 10 days by a group they claim tortured them and chanted “death to America”, although no organisations have yet claimed responsibility for the abductions.

IS has become more prevalent in Yemen over the past year, with the group and its affiliates claiming responsibility for a number of attacks in the republic, including two bomb attacks in September 2015 in which a total of 45 people were killed.

It also released a video in April 2015 showing the murder of 15 government soldiers, and carried out a series of car bombings in June 2015, in which at least 30 people were killed.