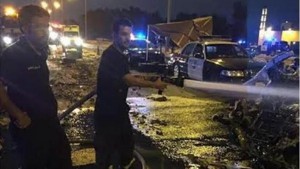 Saudi Press Agency (SPA) reported that ISIS militant group claimed responsibility for an explosion that damaged a car in the Saudi capital Riyadh on Monday. The incident took place because of a bomb that had been affixed to the vehicle by an ISIS member.

The Saudi citizen said that his car had been damaged by a blast on Monday while parked in front of his house in the city’s Al-Azizia district, SPA reported citing a police spokesman. The blast caused no casualties; however, some nearby vehicles were damaged.

ISIS, which controls territory in Iraq and Syria, has staged a series of attacks in the kingdom. In 2014, Saudi Arabia declared the group a terrorist organization and apprehended hundreds of its supporters. Furthermore, it has been participating in the fight against extremist organizations in several countries.

In a statement released on the Telegram social messaging platform, ISIS’s Amaq news agency said the blast was triggered by a “sticky bomb” attached to the vehicle of a member of the Saudi armed forces, the SITE monitoring service reported.

A Saudi interior ministry spokesman was not immediately available for comment.

Among the attacks by ISIS was the incident of January 29th, when a Shi’ite Muslim mosque in the al-Ahsa district in Eastern Province was attacked killing four people and injuring 18. It was among a string of attacks claimed by the ISIS- affiliated jihadists that killed around 50 Saudis in the past year.