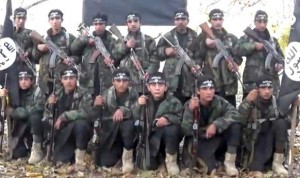 New video shows the fresh-faced recruits dressed in full combat fatigues and wearing the black and white flag of ISIS.

The fighters are filmed proudly pledging allegiance to the terror group before they take part in a series of training exercises – each armed with an AK47 rifle.

The dozen or so fighters even practise firing their guns at a remote mountain location, squirming on the floor in a pathetic simulation of regular army training exercises.

ISIS routinely issues videos and images showing young fighters and the indoctrination camps they are trained at.

Western observers believe the fanatical regime has grown increasingly desperate after sustained campaigns against the group by Russia and the West have seen their numbers rapidly dwindle.

US military chiefs earlier this month revealed the twisted terror organisation had ceded 40 per cent of its territory in Iraq and 20 per cent in Syria to coalition forces in recent months.

It comes amid claims jihadists are encouraging boys as young as five to execute their parents who are deemed not loyal to the barbaric organisation.

The radical Islamists have also enlisted an increasing number of teenage recruits as suicide bombers.