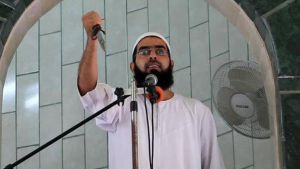 Knife-wielding terrorists are advised to target smaller crowds or someone walking home from a night out or working the night shift, “or someone walking alone in a public park or rural forested area, or someone by himself in an alley close to a night club or another place of debauchery, or even someone out for a walk in a quiet neighborhood. One should consider canals, riversides, and beaches.” They further advise jihadists to carry an object like a baseball bat to inflict blunt-force trauma on victims before stabbing.

In gory detail, jihadists are encouraged to go for major organs, arteries or the neck, but not the skull as their knife blade may break. “It is advised to not necessarily attempt to fully detach the head, as the absence of technique can cause a person to spend a long time attempting to do so, that is, unless the individual’s circumstances and capabilities allow for such.”

“Lest the operation be mistaken for one of the many random acts of violence that plague the West, it is essential to leave some kind of evidence or insignia identifying the motive and allegiance to the Khalifah, even if it is something as simple as a note pinned or attached to the victim’s body,” the terror guide adds.

Jihadists are told to plan their attacks in such a way that they “attain a reasonable kill count,” and to bear in mind “the more gruesome the attack, the closer one comes to achieving the desired objective” of inflicting terror.

The magazine issue recognizes Dahir Adan for stabbing 10 people at a Minnesota mall last month “in response to the calls to target the citizens of the nations involved in the Crusader coalition.” ISIS mentioned nothing of Ahmad Rahami’s pressure-cooker bombs in New York and New Jersey that same weekend.

An infographic in the magazine from ISIS’ Bangladesh branch breaks down their attacks by targets: 42 percent Hindus and Buddhists, 27 percent Christian, 19 percent secularists and atheists, and 12 percent Shiite.

The Holey Artisan Bakery in Dhaka was targeted on July 1 as “a sinister place where the Crusaders would gather to drink alcohol and commit vices throughout the night, feeling secure from the wrath of Allah that was awaiting them,” states an article bylined Tamim Chowdhury, a onetime Canadian resident who was the head of ISIS in Bangladesh until he was killed in an August raid.

Twenty-two civilians and two police officers were killed in the cafe attack.

Another article from ISIS’ East Africa branch urges men to follow “without delay” in the footsteps of San Bernardino terrorist Tashfeen Malik and a recent trio of female terrorists who attacked a police station in Mombasa, Kenya.

“They can take their example from the countless thousands of men who have sacrificed themselves for Islam throughout the ages, or they can take a lesson from their courageous sisters,” the article states, adding that imams in the West should be especially targeted as they “have fabricated a false religion of apostasy from elements of democracy, nationalism, liberalism, pacifism, and pluralism, doing so in servitude of their Crusader masters.”