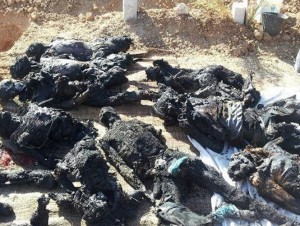 ISIS militants who lost a key town to Iraqi forces were burned alive in full public view by their own men after they fled to the group’s stronghold of Mosul, in a terrifying message to other fighters, a media report has said.

Several Mosul residents claim that when the black clad jihadists made it to Mosul, some 250 miles north of Ramadi city retaken by Iraqi forces, they were set on fire in the town’s main square, the FoxNews.com reported.

“They were grouped together and made to stand in a circle. And set on fire to die,” a former resident of northern Iraq now living in the US but in touch with family back home was quoted as saying by the FoxNews.com.

Several other Iraqis with relatives in Mosul said defeated ISIS militants were being punished – and executed – for not fighting to the death in Ramadi, it added.
“There is no surprise on executing ISIS fighters from Ramadi. They did the same to fighters after Tikrit,” said Michael Pregent, a terrorism expert and former intelligence adviser to General David Petraeus in Iraq.

The retaking of Ramadi, the capital of Iraq’s Anbar Province which ISIS took over last May, was a major setback for ISIS.

With Iraqi government mustering to recapture Mosul, an increasingly paranoid ISIS has stepped up murders of women and children, it said, citing people trapped in the city.

“They come to the house and take the children and accuse them of being spies,” said a stateside Iraqi with knowledge of the situation. “If the mom cries and gets upset at them, they accuse of her being a spy too and take her to the jail and later kill her.”

The terrorist group is feeling the heat of a coming onslaught, said Pregent. “They are using women and children executions to intimidate – the harsher the tactic the more desperate the leadership is.”