You are here: Home / Europe / ISIS bombers are ready to carry out ‘lone wolf’ attacks in the UK 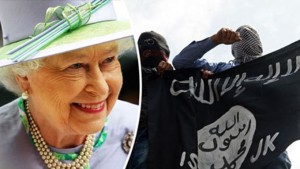 Islamic State militants are training British jihadis to carry out ‘lone wolf’ attacks in the UK rather than travelling to their stronghold in Syria, it was reported today.

Chillingly, they revealed that the Queen and the Royal family would be targeted at this Saturday’s VJ commemorations.

The investigation also learned that ISIS already has potential bombers in UK who are ready to strike after being trained at terror camps in Syria.

News of the VJ Day plot has forced the police and MI5 into a frantic race against time to thwart the assassination attempt.

Such an attack, if successful, would cause high casualties and represent the realisation of long-held fears of a terror ‘spectacular’ by home-based Muslim extremists.

Two Sky News reporters posing as male and female jihadis on Twitter and in chatrooms came into contact with two British ISIS militants – Junaid Hussain, a 21-year-old hacker from Birmingham and his wife Sally Jones, a former punk from Chatham in Kent.

Hussain runs the ISIS recruitment arm in the terror group’s de facto capital of Raqqa in Syria and is a top-five target for the U.S. Secret Service.

Jones is working alongside her husband in Raqqa recruiting female militants.

In a series of conversations on encrypted messaging sites over a four months, the reporters convinced Jones that they wanted to make a bomb.

Jones then gave detailed instructions on how to construct a pressure cooker explosive and insisted on seeing receipts to prove they had bought the materials.

She revealed she had another potential bomber in Scotland and two others who had so far failed to carry out attacks.

She later sent details of the plot to attack the Royal family at the VJ commemorations on Saturday, which were passed on to the Metropolitan Police’s anti-terror branch.

The Mail on Sunday revealed at the weekend that a specific threat was made against the Queen, triggering an urgent review of security arrangements for next weekend’s events.

Other members of the Royal Family, including Prince Charles, who is identified in intelligence reports as another possible target, are also due to attend.

They will join Prime Minister David Cameron, assorted dignitaries, more than 1,000 veterans of the Far East campaign and their families, and serving members of the Armed Forces.

And with thousands of members of the public expected to line the streets around Whitehall and Westminster Abbey, police fear enormous potential for carnage.

The plot is understood to involve a device similar to that used in the 2013 Boston Marathon bombing which killed three people and injured more than 260.