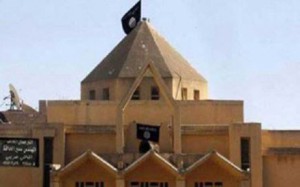 Four children were killed when Islamic State blew up an historic church in Mosul, Iraq’s second city. The blast destroyed the Mother of Aid church, according to the Kurdish news site Rudaw.

Saeed Mamuzini, of the Mosul branch of the Kurdistan Democratic Party, said the children happened to be near the church, which was more than 1,000 years old and was in central Mosul.

A woman journalist, Suha Ahmed Radi, was also executed this week after being accused of being a spy by Islamic State in Mosul, bringing to 14 the number of journalists who have died in the city since it fell to the Sunni jihad terror group in June last year.

Dozens of churches and Shia mosques in Mosul have been blown up since then, including the popular 19th century Hamo mosque and the 1800-year-old Assyrian church, because they were deemed heretical and sacrilegious.

Islamic State has also posted videos showing terror thugs using sledgehammers to destroy the tomb of the biblical prophet Jonah. St Ephrem’s Cathedral, once the mother church of the Syrian Orthodox archdiocese, is currently serving as an ammunition depot.