You are here: Home / MidEastGulf / ISIS billboards showing life jacket and military vest asks: “What would you rather wear on Judgement Day?” 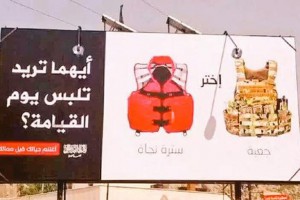 ISIS has stepped up its propaganda war amid reports that it is slipping from power in Syria and Iraq, with billboards reportedly posted throughout the streets of Syria to put fear into civilians.

The disturbing advertising boarding features pictures of a life jacket and a soldier’s vest and reads: “What would you rather wear on Judgement Day?”

The life jacket is a reference to the plight of refugees fleeing the tyranny and brutality of ISIS in flimsy boats across the Mediterranean.

Many of the refugees drown, including the shocking death of three-year-old Aylan Kurdi. It was today reported that 8,000 of ISIS’s estimated 18,000 fighters have been killed by US-led air strikes, Kurd fighters, Iraqi and Syrian government forces and other rebel groups.

A source in the ISIS stronghold of Raqqa in Syria told the Mirror: “Things are changing.

“Here people are starting to rebel. Little things in the streets.

“They talk back to the religious police, even alcohol is being made in private.

“It wasn’t like this one month ago. I think they (ISIS) are starting to struggle, particularly here.

“The airstrikes are causing them problems, they struggle to operate in the open, the executions are less regular.”