You are here: Home / Senza categoria / ISIS believes Dabiq battle is a sign of the end of the world in Islam 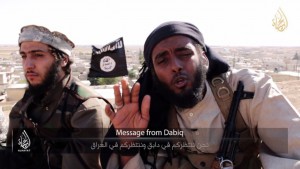 Turkey and Syrian rebels have teamed up to take back the northern Syrian town of Dabiq from the Islamic State group. As U.S.-led airstrikes fell from the sky Sunday, the ground battle claimed 15 rebels during heavy clashes and 13 Islamic State fighters, the Turkish military claimed.

But for the militant group known as ISIS, the stakes are perhaps much higher than they seem. ISIS propaganda leaders have long said a battle for Dabiq, about 6 miles from the Turkish border, is a sign of the end of the world in Islam. They allegedly claim the Prophet Muhammad prophesied that the town would be the setting for an apocalyptic battle between a Muslim army and a foreign military.

After capturing Dabiq in 2014, ISIS pointed to the prophecy to help recruit followers across the world for its so-called caliphate in Syria and Iraq. It also named its official English-language magazine after the town. According to the legend, Muslims will win the battle at Dabiq against Rome’s Christian army and then take Istanbul.

“The Islamic State fought ferociously to capture the village this summer because its members believe the great battle between infidels and Muslims will take place there as part of the final drama preceding the Day of Judgment,” wrote William McCants, director of the Project on U.S. Relations with the Islamic World for the Brookings Institution in Washington, D.C., in 2014.

For ISIS’ enemies, the battle is more strategic. Turkey and Syrian rebels have been working to push ISIS back from towns near the Turkish border for months. In August, Turkey claimed the border town of Jarablus, a crucial passing station for the militants.

“We are very close to Dabiq…. We have planned for this,” Ahmad Othman, commander of the Sultan Murad group, one of the Turkish-backed rebel factions advancing on the town, told the Wall Street Journal.

ISIS was protecting the town with land mines and other explosives. It also urged its strongest fighters in other areas to travel to Dabiq for the eventual showdown.

“During our battles against ISIS in other areas, we did not face many difficulties,” Othman said. “But the areas [we need to go through to get to Dabiq] have been bolstered and the fighters there are well-trained.”