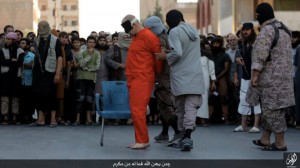 Islamic State’s (ISIS) jihadists on Monday executed two soldiers from the Syrian Democratic Forces (SDF) who have been captured by the group during clashes in Raqqa countryside, like reported by aranews.net.

The radical group has executed the soldiers on charges of “opposing Allah’s Sharia and fighting the Caliphate’s rule”.

This comes amid continued military operations by the Kurdish-led SDF troops against ISIS in the vicinity of Raqqa.

The SDF announced that it has captured over 2500 km2 in western Raqqa Governorate as part of the second phase of the US-backed Euphrates Wrath Operation. The polyethnic alliance also confirmed that they had cleared 196 villages and dozens of farms.

During the first phase of Euphrates Wrath, which began on November 6, the SDF liberated roughly 560 km² in northern Raqqa. “Thus, since the beginning of the battle for Raqqa, 3200 square kilometers have been cleared, including 236 villages.”

The SDF launched the second phase of the Operation Euphrates Wrath with the objective of securing Raqqa’s western countryside and Tabqa Dam, which bridges the Euphrates River. The first phase of the operation focused on securing the banks of the Balikh River.

The SDF confirmed the that they had eliminated 620 ISIS militants during the course of the campaign, captured 18 others and destroyed “over 40 car bombs.” In addition, SDF troops seized “a great deal of ammunition and weapons,” as well as “a number of ISIS vehicles.”

The long-term objective of Euphrates Wrath remains the elimination of the Islamic State in its de facto capital –Raqqa city.