You are here: Home / MidEastGulf / ISIS behead teenage boy in front of parents and bloodthirsty crowd for missing prayers 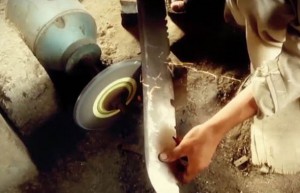 The Syrian teenager was murdered in front of baying crowds in his home town of Jarablus.

ISIS jihadis regularly carry out public executions as a form of punishment for those who flout their strict rules on clothing and behaviour.

Beheadings are also used as part of their propaganda war to remind the West of their savagery.

Anti-ISIS activist Nasser Taljbini said: “Dozens of people attended the brutal execution, including the victim’s parents who were forced to witness the beheading of their own son.

“ISIS is trying to prove that it is still powerful despite all the military defeats.

“The group is trying to terrorise people through conducting such public punishments.”

Jarablus is the last ISIS-held town on the Syria-Turkey border and is strategically vital as it serves a stopping off point for fighters travelling from Europe to the group’s de facto capital, Raqqa.