You are here: Home / MidEastGulf / ISIS bans TV because it promotes ‘wizards and rationalist philosophies’

The extremist group has banned televisions and satellite receivers being bought, sold or repaired in ISIS-controlled parts of Syria and Iraq. 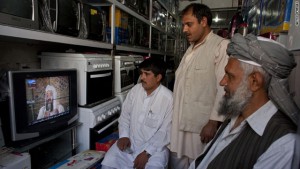 ISIS has released a bizarre infographic warning its supporters not to watch satellite TV, it has been reported.

The picture, which appears to have been released by ISIS’ propaganda arm, lists reasons for militants to not watch satellite TV – which they claim is full of propaganda.

“Insulting Allah and making fun of His religion and His allies via television series and vile dramas, which lead to people to develop a taste for such things,” it reads.

Another weird justification in ‘The Enemy Within’ is that satellite TV “propogates sorcery, charlatanism, and rationalist philosophies that poison the minds with ideas of atheism and boldness against Allah.”

It also says the TV channels try and divide Muslims and “defame their reputation”.

In December it was reported that Islamic State banned televisions in areas under its control to stop people watching foreign channels.

The extremist group has banned televisions and satellite receivers being bought, sold or repaired in ISIS-controlled parts of Syria and Iraq.

It has criticised channels such as Al-Jazeera and Al-Arabiya as well as many Western media outlets over coverage of its occupation of parts of Iraq and Syria.

In recent months militants in some areas of Syria are reported to have entered residents’ homes to smash up satellite receivers.