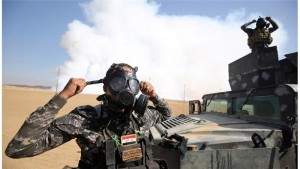 Islamic State (IS) militants used chlorine gas to attack Iraqi Counter-Terrorism Forces in Mosul, according to an Iraqi commander on Wednesday.

As Iraqi forces continue to advance in the north and east of Mosul, civilians search for corridors to escape from the battlefield.

In the video below, Kurdistan24 correspondent Zardasht Hame visits the newly liberated neighborhood of Tamin, east of Mosul.

An Iraqi Counter-Terrorism Forces commander told Kurdistan24 the extremist group had attacked Iraqi forces with chlorine gas in the past two days.

“Thank God. No one died, but some of our soldiers experienced problems with their breathing,” he said.

Iraqi forces aim to pass the Tigris River in central Mosul to the west of the city after their troops cleared the eastern parts from IS.