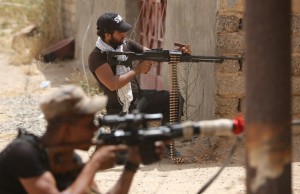 Three militants disguised in military uniform killed at least eight people in a local government office in Amiriyat al-Falluja in western Iraq on Tuesday, in an attack claimed by ISIS

One of the attackers blew himself up inside the building, but the other two were still at large, according to deputy district council chairman Falih al-Issawi, who said he could still hear gunfire.

A further 17 people were wounded in the attack, including the head of the council, Shakir al-Issawi, who leapt from the window of his office after the explosion, a police source said.

In a statement, ISIS said the three attackers had killed “dozens of apostates.”

Located on the western fringe of Baghdad, Amiriyat al-Falluja is one of the few remaining pockets of territory under government control in Anbar province, most of which is held by ISIS.

Since overrunning the provincial capital Ramadi last month, the insurgents have sought to consolidate their gains in Anbar by attacking the last government strongholds, strung out along the Euphrates river valley.