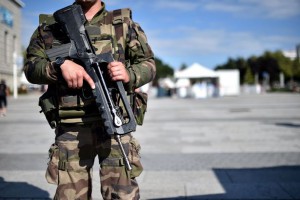 Thousands of soldiers have been deployed to French schools and pupils are set to receive ‘ terrorism training’ as part of the curriculum in a bid to combat extremism.

Following a spate of devastating terror attacks in the country, including the Bataclan and Nice massacres , France will now deploy around 3,000 reserve troops to provide security to schools, education and security ministers announced.

Anti-terror drills will also be ramped up in schools, preparing students for possible attacks.

Younger children between the ages of two and six will be taught to keep quiet during a ‘game of hide’ and not told of any dangers during the drills.

Crisis centres will also be put in place at schools, with around 500 education administrators trained to manage them.

The latest £40m security measures are in addition to the extra 3,000 reservists being ordered to be “particularly vigilant around schools”.

Vallaud-Belkacem said the threat in France “is high and real” – but the new plans are “not about ceding to panic or paranoia”.

Security Minister Bernard Cazeneuve said: “Throughout the year, particular attention will be put around schools.

“Active surveillance around schools, high-schools and universities will be reinforced by roving patrols.”

Around £43 million of government money has been pumped into the new measures, to help pay for ramped-up security equipment including video door phones and new alarm systems.

Anti-terror drills in schools will also be increased from two to three drills a year.

France has been rocked by a series of Islamist terrorist attacks since January 2015.

The Charlie Hebdo attacks on January 7 left 12 people dead, while shootings in Paris in November 2015 claimed the lives of 130 people and injured more than 200 – the deadliest terrorist attack to ever take place on French soil.

In July this year, 86 people were killed and more than 300 injured when a truck plowed into a crowd of spectators watching a Bastille Day fireworks display in Nice and, just two weeks later, a priest was killed by two ISIS terrorists in Saint-Étienne-du-Rouvray.

The French government has extended the national state of emergency until January 26, 2017.

The government has launched a free smartphone app to alert users about possiblesecurity incidents , including all major natural, technological and terrorist-related risks, the foreign office reports.