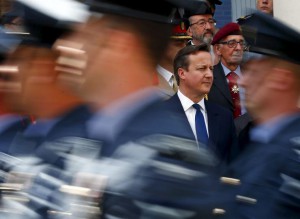 British police successfully foiled a plot to explode a pressure cooker bomb at a parade in London Saturday, it has been confirmed.

According to The Sun newspaper, a suicide plot was intended to strike an Armed Forces Day parade targeting soldiers from the unit of Lee Rigby, a British soldier murdered by Islamic extremists on a London street in 2013. The attack reportedly failed, however, after one of its chief architects in Syria unwittingly recruited an undercover investigator from the newspaper to help carry it out.

It is alleged that a leading Islamic State group figure, identified as Junaid Hussain, who was originally from Birmingham, U.K, told the investigator: “It will be big. We will hit the kuffar (unbelievers) hard InshAllah. Hit their soldiers in their own land. InshAllah. Soldiers that served in Iraq and Afghanistan will be present. Jump in the crowd and detonate the bomb.

“They think they can kill Muslims in Iraq and Afghanistan then come back to the U.K. and be safe. We’ll hit them hard InshAllah,” he is reported as saying.

A Scotland Yard spokesman said: “The police, together with our security partners, remain alert to terrorist threats that may manifest here or where individuals overseas may seek to direct or inspire others to commit attacks in and against the U.K.

“It is always helpful when journalists share with us information, as The Sun did in this case, that could indicate terrorist or criminal activity.

“While the UK threat level from international terrorism remains severe, we would like to reassure the public that we constantly review security plans for public events, taking into account specific intelligence and the wider threat.

“Our priority is the safety and security for all those attending or involved, the public are encouraged to continue with their plans to attend or take part in events as normal. We would also like to reiterate our long-standing advice to remain vigilant and alert.

Speaking after a meeting of a high-level security committee, British Prime Minister David Cameron vowed that “terrorists will not succeed. ”

At least 65 people are now known to have died in three terror attacks on three continents, all linked directly or indirectly with ISIS. The group has warned it will carry out attacks throughout the Holy month of Ramadan, which lasts until July 18.