You are here: Home / Senza categoria / ISIS attack on Paris suggests a change in Strategy 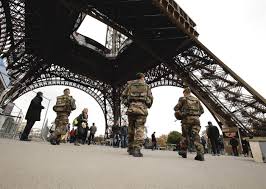 The Islamic State in Iraq and Greater Syria claimed responsibility on Saturday for a series of explosions, shootings, and a mass hostage-taking in Paris that left more than 100 people dead.

If the claim is confirmed, it would be more evidence of a shift in the militant group’s tactics, toward attacks that inflict massive civilian casualties outside its territorial base in Iraq and Syria.

The group said it was behind the attacks in a statement circulated online in Arabic and French. “Eight brothers carrying explosive belts and guns targeted areas in the heart of the French capital that were specifically chosen in advance.”

The statement also connected the attack to French airstrikes against the group in Syria, blaming France for “striking Muslims in the Caliphate with their planes which have not helped them in any way in the ill-smelling streets of Paris.”

The statement was branded with an “Islamic State” insignia and resembled previous statements claiming responsibility for prior attacks and killings in the Middle East.

The Paris attacks, along with a separate attack in Lebanon, which killed 43 may be clearest sign to date of a new phase of operations for ISIS, a phase involving attacks outside the theater of war in Iraq and Syria.

In the past, the organization set itself apart from other jihadist groups by seizing and holding massive chunks of territory in both Syria and Iraq, capitalizing on conflict and the erosion of the state in both countries.

The chaos in Paris came a day after ISIS claimed a suicide bombing in Beirut that killed at least 43 people. In a statement assuming responsibility for the Beirut bombing, the group articulated a sectarian motive, saying it aimed to kill Shia Muslims. It also said it targeted Hizballah, the Lebanese militant group that intervened on the side of the government in the civil war in Syria.

ISIS’ branch in Egypt is also the prime suspect in the crash of a Russian passenger jet in the Sinai Peninsula. The so-called “Sinai Province” of the Islamic State claimed that it brought the jet down on October 31. Western governments say they suspect a bomb exploded on board the plane, but the exact cause of the crash remains undetermined.

Regardless, the ISIS statement claiming it brought down the jet professed a desire to inflict mass civilian casualties, an intention that the group’s Egyptian branch had not previously articulated.