You are here: Home / Mediterranean / Isis are deploying fighters at oil wells in northern Libya 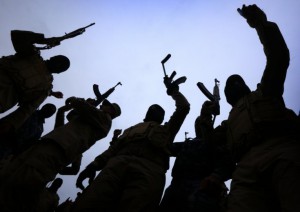 Fighters from the Islamic State (Isis) have deployed fighters at several oil field sites in Libya, prompting fears the Islamist militant group is planning a full scale attack, it has been reported on 10 April. Staff from at least three of the oil fields, where many foreign workers work, were evacuated from oil fields in the east of Libya.

According to security officials the production of oil in the north African country will not be affected as the fields have already ceased production until the security risk has been reduced, reports the Mail Online.

Security sources have told Reuters that fighters, who are loyal to IS (Daesh), have been mobilising in Nawfiliyah, as well as the oil ports Ras Lanuf and Es Sider. Earlier this month, five members of the Petroleum Facilities Guard were killed in an attack by suspected IS militants near Bayda field, about 155 miles south of Es Sider and Ras Lanuf. The guard is a paramilitary force responsible for controlling and protecting oil facilities in the east of the country.

It is not the first time that IS have targeted Libyan oil fields. A full-scale attack by the terror group in January resulted in damaged facilities in Ajdabiya, and an oil tanker attacked by rockets and set ablaze near Es Sider. The port is tipped as the North African nation’s largest oil depot, despite it ceasing operations for over 12 months.

The militant group – which has operations are based in the central Libyan city of Sirte – is yet to completely seize full control of the country’s oil production, unlike fields in countries such as Iraq and Syria.

Production currently stands at less than one-fifth of the 1.6 million barrels per day the Opec member was producing before Muammar Gaddafi was toppled during the 2011 uprising.