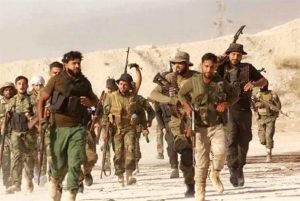 ISIS anticipated the southern battle in Syria by initiating an attack using an explosive-laden vehicle at the entrance of the heavily defended base near al-Tanf border crossing with Jordan, like reported by aawsat.com.

But, sources said opposition fighters repelled the attack, which coincided with reports about activating the southern front and expanding al-Tanf Garrison on the Syrian-Jordanian border to become a base for operations launched against the terrorist group.

Lieutenant Mohannad Al Talla, Commander of the “Army of Revolution Commandos,” a group active in southern Syria, told Asharq Al-Awsat that efforts are underway – in cooperation with the International Coalition -to activate the southern front and fight ISIS in line with the battles launched by several opposition factions to confront the terrorist group in the southern areas ahead of moving towards the eastern and central regions.

A Western intelligence source told Reuters that US and British special forces are expanding the Tanf base to use it as a major launching pad for operations in coming months to oust militants from Bukamal, a major militant stronghold.

Free Syrian Army sources told Asharq Al-Awsat that following the visit of Jordanian King Abdullah II to the US a few weeks ago, an agreement was reached to create a force, backed by five states, to provide the “free factions” operating in the area with modern arms and equipment and help it move towards the east in the direction of Deir Ezzor, which it plans to liberate from ISIS.

Meanwhile in Tehran, IRNA quoted Iran’s Supreme Leader Ali Khamenei as saying on Sunday that the recent attacks launched by Washington on Syrian territory were “a strategic mistake.”

Earlier, a joint command center made up of the forces of Russia, Iran and also “Hezbollah” said the US strike on Syrian air base on Friday crossed the “red line,” vowing to respond to any new aggression and pledging to increase its support for its ally, Reuters reported on Sunday.