You are here: Home / Mediterranean / ISIS amassing an army on Europe’s border 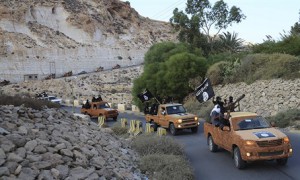 There is an increasing risk of  Libya becoming a haven for combatants from Islamic State (ISIS), even as western nations target the extremist jihadist group in Iraq and Syria, the French defense minister warned in comments published Sunday.

“We see foreign jihadists arriving in the region of Syrte (northern Libya) who, if our operations in Syria and Iraq succeed in reducing the territorial reach of Daesh (Islamic State or ISIS) could tomorrow be more numerous,” defense minister Jean-Yves Le Drian told the Jeune Afrique weekly.

Le Drian ruled out military intervention in Libya but warned the West had to try to foster Libyan unity in the face of such a threat.

“It is a major risk and that’s why there absolutely must be understanding between the Libyans,” said Le Drian.

Analysts believe Libya would present a less hospitable environment for ISIS than Syria and Iraq.

But Tripoli is hampered in presenting a united front as rival governments vie for power – a militia alliance including Islamists that overran Tripoli in August 2014, and the internationally recognized administration that fled to eastern Libya.

The current chaos in Libya with groups of competing militias since the overthrow and death of dictator Muammar Gaddafi in 2011 has allowed ISIS to build influence, notably in Gaddafi’s coastal home town of Sirte, east of Tripoli.

And there are widespread fears the group could exploit tribal conflicts further into Africa.

Recognizing ISIS’s  increasing Libyan reach, Le Drian said he feared that ultimately the group could form one half of a double-edged jihadist challenge in conjunction with Boko Haram, which pledged allegiance to their fellow Islamic extremists in March and which has been bringing terror to Nigeria, Niger, Chad and Cameroon.

“There is a major risk of a link being  forged with Boko Haram,” said Le Drian, urging Libya’s rival administrations to make common cause while urging neighbours Algeria and Egypt to work diplomatic channels to that effect.

But Le Drian insisted that France would not countenance military action at least while the Libyans are divided among themselves.

“That’s not on the agenda. One cannot release the Libyans from their responsibilities by suggesting there might one day be an intervention. They must find solutions themselves.”