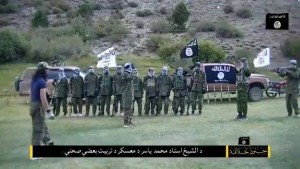 Members of the so-called Islamic State (IS) are training Russian-born militants in Afghanistan in a bid to strengthen its foothold in central Asia, according to a senior diplomat. The instructors include UK and US citizens.

“There are several camps operated by [Islamic State, previously ISIS/ISIL, in Afghanistan] that train people from Central Asia and some regions of Russia. They speak Russian there,” director of the Russian Foreign Ministry’s Second Department, Zamir Kabulov said at a security conference in Moscow.

Kabulov added that the camps contain a wide range of foreign nationals, including Arabs, Pakistanis and even Britons and Americans. According to estimates from Russian military staff, between 2,000 and 3,000 IS militants are thought to be present in Afghanistan, and that number is growing.

Speaking at an international conference on Afghanistan on 8 October, Kabulov said: “ISIL (IS) rising up in Afghanistan constitutes the priority danger. Just think about it: ISIL really appeared in Afghanistan a year ago and there are already 3,500 people under its arms plus sympathisers, who can turn into militants very quickly.

“They find the most authoritative local leader who has rivals. He is offered cooperation and assistance in eliminating the rivals. This is done. When it’s over, he himself is killed. And then the whole district, province, or a larger territory falls into ISIL’s hands. Virtually without fighting, ISIL is expanding the area of its influence in a creeping way,” Kabulov said.

Afghanistan is still plagued by the Taliban, which emerged in the 1990s and has some 40,000 fighters in its ranks, but the group must now also contend with a growing IS presence. The head of Russia’s Main Intelligence Directorate, Colonel General Igor Sergun said that IS is contesting the Taliban’s hegemony and views the country as a recruiting ground and bastion for further expansion across central Asia.

“ISIL uses the worsening of the situation in Afghanistan to strengthen its position,” Sergun said. “We estimate that ISIL gets new troops by bribing field commanders of Taliban, the Islamic movement of Uzbekistan and other radical religious organizations operating on Afghan territory,” he added.

A UN report released last month warned that IS is gaining ground in Afghanistan with growing support from sympathisers (around 10% of the Taliban insurgency sympathise with IS). It is also drafting in people from 25 of the country’s 34 provinces.