You are here: Home / Senza categoria / Isis, a year of the caliphate: the 7 wars in Muslim countries where ‘Islamic State’ is powerful or growing in strength 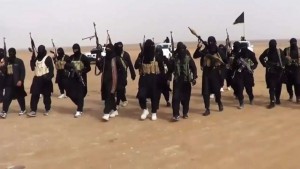 There are seven wars raging in Muslim countries between the borders of Pakistan in the east and Nigeria in the west. In all seven – Afghanistan, Iraq, Syria, Yemen, Libya, Somalia and north-east Nigeria – local versions of Isis are either already powerful or are gaining in influence. Key to its explosive expansion in Iraq and Syria since 2011 is its capability as a fighting machine, which stems from a combination of religious fanaticism, military expertise and extreme violence. In addition, its successes have been possible because it is opposed by feeble, corrupt or non-existent governments and armies.

The reach of the “Islamic State” was hideously demonstrated last week by near simultaneous attacks in Tunisia, France, Kuwait and Kobani in Syria. The first three atrocities received blanket media coverage, but the fourth, and by far the biggest massacre, was at Kobani, where at least 220 Kurdish civilians, including women and children, were massacred last Thursday by Isis fighters.

Sadly, it was an event that has received only limited attention in the outside world, doubtless because the mass killing of civilians is seen as yet one more tragic but inevitable episode in the war in Syria and Iraq.

Such desensitivity to the ongoing slaughter in that conflict is not only morally wrong, but shows serious political blindness. What makes the killings in a suburb of Lyon, the beach at Sousse and the Imam al-Sadiq mosque in Kuwait so different from – and in some ways more menacing than – the 9/11 and 7/7 attacks is that today these crimes are promoted by a government, in the shape of the self-declared caliphate, which has a more powerful army and rules more people than most members of the UN.

The US and western European governments are eager for their people to avoid focusing on this dangerous development because they do not want to highlight their own culpability in failing to weaken or even contain Isis.

Its strengths – as well as its opponents’ weaknesses – help to explain its rapid rise and that of other al-Qaeda-type movements in the Middle East and North Africa. But there is a further toxic ingredient which propels Isis forward: this is the exacerbation and exploitation of religious differences and hatreds, most crucially those between Sunni and Shia Muslim. From the moment in the wake of the US invasion in 2003 that Abu Musab al-Zarqawi created the forerunner to al-Qaeda in Iraq and Isis, its prime target was Shia Iraqis. Suicide bombers slaughtered Shia civilians as they prayed, sought work in the market places, or waited to catch a bus.

Much the same is now happening in Muslim countries across the world, and particularly in the seven convulsed by warfare. An example of this is Yemen, where one third of the 25 million population belong to the Shia Zaydi sect and the rest are Sunni, but where there has been little sectarian strife in the past.

In April this year, Isis announced its presence in Yemen by posting a video showing four government soldiers being beheaded and another 10 executed.

Compared to al-Qaeda in the Arabian Peninsula (AQAP), Isis is a late-comer in Yemen but both groups flourish as Sunni-Shia hostility increases so they can present themselves as the shock troops and protectors of the Sunni community. Where Shia victims are unavailable, as in Libya, then Isis groups have ritually murdered Christian migrant workers from Egypt and Ethiopia.

The killing of Shia is not just an expression of hatred, but has a less obvious, though demonic, purpose behind it. An aim is to stir up the Shia into retaliating in kind, carrying out mass murders of Sunni in Baghdad in 2006 and 2007 so they were reduced to a few enclaves mostly in the west of the city. The aim of provoking the Shia is that the Sunni are left with no alternative but to turn to Isis or al-Qaeda clones as defenders. The same calculation may now work in Yemen.

Because Isis publicises and boasts of its atrocities in order to spread fear, it masks the fact that official al-Qaeda affiliates, such as Jabhat al-Nusra in Syria or AQAP in Yemen, are just as dangerous.

Their basic agenda is very similar to that of the self-declared caliphate, with al-Nusra carrying out the enforced conversion of Druze and the massacre of those who resist. This attempted rebranding of extreme but non-Isis Sunni jihadis is opportunistic and often directed at making them more palatable as proxies for Sunni states such as Turkey, Saudi Arabia and Qatar.

There has long been disagreement about the real strength of Isis and its ability to expand. Overall, the argument that Isis is more powerful than it looks has been borne out by events such as the capture of Mosul on 10 June 2014 and of Ramadi on 17 May this year. These Isis victories caught the world by surprise and were important in enabling it to claim success as being divinely inspired.

In reality, there are two crucial components to Isis expansion, one of which is the strength of the organisation itself, but equally important is the spectacular weaknesses of its opponents.

It is this weakness which has repeatedly exceeded expectations, leading not just to the Iraqi army taking flight at Mosul and Ramadi and the Iraqi Kurdish peshmerga, supposedly a tougher force, disintegrating at equal speed last August. Adept though the militants may be at concealing the place and timing of its main assault, it is the feebleness of resistance that has determined the outcome.

The same pattern is repeated across the Muslim world and is presenting Isis and its al-Qaeda equivalents with many opportunities. Some countries, such as Somalia, have had no effective government since the overthrow of Siad Barre in 1991; but, after a spectacularly disastrous US intervention in the 1990s, foreign powers sought to contain rather than eliminate the threat. Somalia was written off as a bolt-hole for al-Qaeda gunmen and pirates, but at least there were not many places in the world quite like it.

But “failed states” are more dangerous than they look because when central governments collapse, they create a vacuum easily filled by groups like Isis. Foreign military intervention has repeatedly been complicit in creating these conditions – in Iraq in 2003, but also in Libya in 2011 and in Yemen this year where a Saudi-led air campaign has been targeting the Yemeni army, the one institution that held the country together.

What might be called the “Somalianisation” of countries is becoming frequent and people in the rest of the world are learning that a “failed state” should be an object of fear rather than pity.

The beliefs of Isis are rightly seen as an offshoot of Saudi Wahhabism, both ideologies degrading the status of women, imposing fundamentalist Islamic norms and regarding Shia and Christians as heretics or pagans. But though they have common features, they are not identical. What Islamic state believes and enforces is a sort of neo-Wahhabism, distinct from that variant of Islam, which is prevalent in Saudi Arabia. In practice, the Saudi state does not try, as Isis does, to murder its two million-strong Shia minority, though it may discriminate against them.

A more accurate accusation against Saudi Arabia is that over the past half century it has successfully used its great wealth to bring mainstream Sunni Islam under the intolerant influence of Wahhabism, thus deepening religious antagonisms.

The violence and determination to expand its rule has brought Isis many enemies, but their disunity, rivalries and mutual suspicions are great. The US and Iran both fight the militants in Iraq and Syria, but do not want the other to emerge as the predominant foreign power.

Meanwhile, the US is hampered in fighting Isis, Jabhat al-Nusra and similar groups by a determination to do so without alienating Sunni states to which it is allied, and on whose support American power in the Middle East depends.

This has been the pattern since 9/11, when Washington wanted to punish the perpetrators, but carefully avoided linking the attack to Saudi Arabia, home country of Osama bin Laden, 15 out of the 19 hijackers, and of the private donors funding the operation. Isis is under pressure, but not enough to crush it or prevent its further expansion.